As Ford’s largest MPV offering, the Galaxy goes some way beyond the practicality that the S-MAX offers, trading some of that model’s nimble feel from behind the wheel. The payoff is worthwhile, though – the Galaxy is one of the most versatile cars on the market. 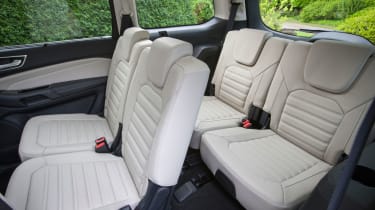 We’re used to testing cars with seven seats and finding that the third row is only really suitable for children, but that’s not true in the Galaxy; adults can actually sit in the sixth and seventh seats and are treated to good leg and headroom, plus a big window for extra visibility. There aren't any USB ports in the third row, but it does feature a useful 12v power socket. There are plenty of storage cubbies dotted around, too, and it’s very easy for all occupants to get in and out of.

The seats of the second row slide back and forth individually if you need more legroom, while other useful features include cup-holders for the third row, a three-point socket in the second row and a deep storage bin under the front armrest. There are also three ISOFIX points in the second-row – one of the Galaxy's big advantages over other cars in its class. 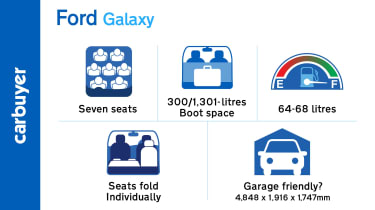 There’s a slim storage bin on top of the dashboard for phones, large door bins that hold 1.5-litre bottles and picnic tables for people sitting in the second row. The rear doors open nice and wide for easy access, even into the third row of seats.

The Galaxy has a 300-litre boot with all seven seats in place, 1,301 litres with the third row down and 2,339 litres with just the front two seats in place. Comparable figures for the S-MAX are 285, 965 and 2,020 litres respectively, demonstrating there’s some useful extra space in the larger Galaxy. The opening of the boot is very wide and its loading lip is low, which together makes it very easy to put heavy and awkward items in the back of the car.

A powered bootlid is offered as an option and this is actually very useful because of how large the door is. Ford has made folding the seats flat very easy, with the third row dropping electrically when you press a button in the boot and the three individual seats in the second row flopping forward when you press another series of controls.

All diesel models of the Ford Galaxy can tow up to 2,000kg thanks to the pulling power of the diesel engines.