The Ford Mondeo is quieter and more comfortable than before, but not as engaging to drive

The Ford Mondeo once enjoyed a reputation as the default choice for enthusiastic company-car drivers, but the latest version is no longer quite as thrilling to steer. However, while it may not match the Mazda6 Tourer in the sportiness stakes, it’s still able to put a smile on your face.

And the same will be true of your passengers, too. The Mondeo has a comfortable ride, thanks to soft suspension, although it isn’t so wallowy as to give rise to carsickness. The steering is light and easy to use, too, which means manoeuvring the big, bulky Mondeo isn’t an intimidating prospect. 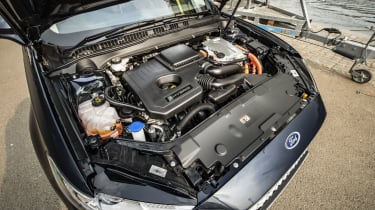 Ford has discontinued the Mondeo’s petrol engines, so there’s a choice of two diesel engines or the hybrid version.

With 0-62mph taking nine seconds, you'd expect the 187bhp 2.0-litre diesel to feel relatively quick, yet it didn't live up to expectations in the real world – although it is quiet for a diesel. The 148bhp diesel's impressive fuel economy seems a worthwhile trade-off for the lower power output, and it still gets from 0-62mph in around 10 seconds.

You can also specify a four-wheel-drive system on ST-Line Edition and Vignale cars fitted with the 187bhp engine, which is only available with the Powershift automatic gearbox. While the four-wheel drive does give you more grip and confidence in slippery conditions, a good set of winter tyres offers similar benefits at a much lower price without increasing fuel consumption – thus saving you money at the pumps, too.

The extra weight of the four-wheel-drive system (a hefty 78kg) doesn't blunt performance as much as you might expect. The 0-62mph time goes from 9.0 to 9.2 seconds for the 187bhp version.

The Mondeo Hybrid pairs a 2.0-litre petrol engine with an electric motor, and is one of the quicker models in the range on paper thanks to a 0-62mph time of 9.2 seconds. It doesn’t feel particularly speedy, however, not least because the CVT automatic gearbox seems to strangle the engine. Accelerate hard and you get high revs and lots of noise but not much in the way of acceleration. Unless you’re a company-car driver looking for lower tax costs, or you’ll do most journeys in town, we’d recommend sticking with one of the diesels.