The perceived quality of Fords has been getting better and this Mondeo is the closest the company has come to matching the Volkswagen Passat for fit and finish. The Mondeo estate also earned a five-star safety rating when it was crash-tested by Euro NCAP again in 2019, with higher scores gained the second time around.

The Ford Mondeo was rated poorly for reliability in our 2017 Driver Power owner satisfaction survey of cars currently on sale in the UK. Of the owners who responded, 12.7% reported experiencing a problem with their car at least once. Customers were impressed with the practicality of the big Mondeo, but less convinced when it came to its running costs, infotainment and sat nav. It hasn't appeared in the survey since, but Ford finished a lacklustre 24th place out of 30 manufacturers in our 2020 survey. Here, 15.6% of all the Ford owners surveyed reported a fault within the first year of ownership. 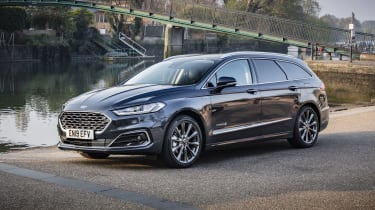 This Ford Mondeo estate was awarded the full five stars for safety by Euro NCAP, both when it was new and when it was retested in late 2019. Individual ratings were 96% for adult occupant protection, 87% for child occupant protection, 70% for pedestrian protection and 73% for safety assistance. To see the effect of the extra safety technology, the car previously scored 86%, 82%, 66% and 66% respectively. The current car is more strongly constructed than the old model and can be fitted with a huge range of features – including inflatable rear seat belts that hold occupants tightly in the event of an accident.

Also available are city safe automatic braking (which helps prevent low-speed collisions) and adaptive cruise control (which maintains a safe gap to the vehicle in front on motorways). Other options include blind-spot monitoring, lane-keeping assistance and a road-sign-recognition system that can ‘read’ signs and then display their information on the dashboard.