“The Hyundai i800 MPV is one of the few eight-seat models available in the UK, yet it’s still affordable to buy” 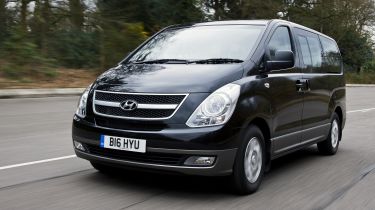 The Hyundai i800 is one of the only eight-seat MPVs aimed squarely at families, as most manufacturer’s class eight-seat versions of models like the Volkswagen Transporter and Mercedes V-Class as commercial vehicles, sold separately from their glossy high-street showrooms.

Having an extra chair immediately gives the i800 an advantage over most of its seven-seat rivals like the Ford Galaxy, SEAT Alhambra and Citroen Grand C4 Picasso, but it’s worth considering whether you really need the extra room, because the Hyundai isn’t without compromises in some other areas.

For a start, the Hyundai i800 is based on van underpinnings, so even though it has different suspension to the panel van for a better ride, it’s still far less car-like to drive than the Galaxy or Alhambra. Measuring more than five metres long and just under two metres in both width and height, the i800 is also longer than a Land Rover Discovery, making it potentially difficult to park.

With 134bhp, its 2.5-litre diesel has reasonable power, but its 0-62mph acceleration time of 17.6 seconds also looks glacial next to sporty rivals like the Alhambra, which covers the dash in 10.2 seconds with a mid-range 2.0-litre diesel and 148bhp. Choose Hyundai’s five-speed automatic gearbox instead and power is increased to 168bhp and the benchmark is covered in 14.4 seconds, but running costs make for grim reading.

Fuel economy of 37.7mpg no longer looks too clever, but this drops to 33.6mpg in the automatic. At least if the fuel bill is split eight ways it’ll look more reasonable, but the aforementioned Alhambra can ferry seven people and return up to 55.4mpg, while the equivalent Ford Galaxy boasts 56.5mpg fuel-efficiency. Business users will also be stung with the top 37% Benefit-in-Kind taxation band, thanks to CO2 emissions of at least 197g/km of CO2. This compares with 27% BiK in the best rivals, potentially saving company-car drivers a small fortune.

The sheer size and boxy shape of the i800 means it is certainly practical, with 851 litres of luggage space even with eight people inside. But, the seating isn’t very flexible, because while the middle row can move back and forth, it doesn’t fold and is tricky to remove.

Without a crash-test having been carried out by Euro NCAP, it’s hard to judge the i800’s safety, but it appears tough and comes with essential kit including anti-lock brakes, electronic stability programme and ISOFIX child-seat mounting points in the second row. Hyundai came 10th out of 27 manufacturers in our 2017 Driver Power customer satisfaction survey, a good result bolstered by just 7.2% of owners reporting a fault in the first year after delivery.

The Hyundai i800 only comes with one 2.5-litre diesel engine, and its commercial origins quickly become apparent when you dig into its credentials. Fuel economy of 37.7mpg wasn’t even too impressive when the i800 was first launched in 2008, but now it makes the Hyundai considerably thirstier than newer rivals, most of which easily top 50mpg. Choosing the five-speed automatic only makes things worse, as the figure tumbles to 33.6mpg.

It’s a similar story with emissions, with the manual producing 197g/km of CO2 and the automatic emitting 225g/km – more than many sports cars. These figures result in the top-tier 37% BiK liability for business users. After the first year's CO2-based road tax (generally included in the on-the-road price), all Hyundai i800s cost £140 a year to tax.

The Hyundai i800 is far from fast or fun

You probably won’t want sports-car performance from an eight-seater – which is just as well. The standard model takes a sluggish 17.6 seconds to get from 0-62mph, making it slower than most other traffic on the road. Still, the 168bhp 2.5-litre diesel fitted in the automatic reduces this to 14.4 seconds, and although performance is far from brisk, there is some grunt for overtaking when you really need it.

There’s plenty of room, but the interior is looking rather dated

Inside, the i800 feels more like a car than a van, yet its vast length of 5,125mm means you won’t be short of space – unless you are an adult in the eighth seat on a long journey. Air-conditioning that can be adjusted from the second row of seats, while MP3, USB and aux-in capability allows for plenty of in-car entertainment. Cheap silver plastic lets down the dashboard, which looks like it’s from a previous generation of Hyundais, because it is.

There are only two trim levels: SE and SE Nav, with Bluetooth, rear parking sensors, a heated driver’s seat and ambient lighting as standard. Upgrade to SE Nav and a seven-inch touchscreen is added with sat nav and traffic reports, along with automatic headlights. Perhaps most importantly, it also brings a reversing camera, which could be worth the investment alone given the i800’s size.

Vast size, but it's not that versatile

Not many family vehicles can seat eight and still boast luggage area of 851 litres, so the i800 certainly has bags of room. However, while the middle bench doesn’t fold and can’t be easily removed, so the i800 isn't as versatile as some of its rivals. Most MPVs now offer seats that can be folded individually with a tug on a lever, or removed altogether by one adult without too much fuss. The i800 also shows its van-based roots in its lack of clever storage cubbies for passengers to hide odds and ends.

Simply use the i800 as it’s intended – a neatly styled minibus with some creature comforts – and there’s impressive headroom and a light and airy interior. Only the rearmost passengers will find kneeroom in slightly short supply.

Big dimensions give sense of safety

The i800’s van underpinnings mean it should be durable and reliable and its sheer bulk is reassuring for both the driver and passengers. The i800 has never been crash-tested by Euro NCAP, but comes fitted with front and front side airbags, anti-lock brakes, electronic stability programme and ISOFIX child-seat mounting points in the middle row.

While the i800 didn’t appear in our 2017 Driver Power owner satisfaction survey, Hyundai was ranked a respectable 10th out of 27 manufacturers. Of the respondents, 7.2% reported a fault with their Hyundai in the first year of ownership.

There’s good and bad news. On the plus side, the i800 represents decent value and there’s a generous amount of standard kit. The five-year warranty is another big plus point. On the downside, the Hyundai badge doesn’t stand up as well as some its competitors, resulting in steeper depreciation. There are also very few options available for the i800, as Hyundai instead encourages drivers to choose the trim level with the kit they require. Metallic paint costs around £650, while leather seat facings cost just over £2,000.