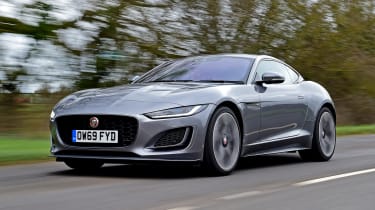 This coupe version of the F-Type is even better to drive than the convertible version, thanks to a stiffer body that helps its suspension to keep things under control. Changes were made to the suspension setup as part of the updates for the 2020 model. New components, including an electronic limited slip differential, were fitted, and the steering was tweaked.

The changes have worked, making the F-Type feel sharper, more agile and lighter than before. As a bonus, the car even rides more comfortably too. The rear-wheel drive P450 is our pick of the range because it feels more playful than the more powerful four-wheel-drive model.

Whichever model you choose, the steering is very accurate and the eight-speed automatic gearbox nice and smooth. All in all, the F-Type Coupe really is a great car for driving enthusiasts and the F-Type R models allow you to tailor the car’s setup to your taste, thanks to adaptive suspension dampers.

For many buyers, the best news is that the most expensive F-Type isn’t necessarily the best. Indeed, the 2.0-litre has a few distinct advantages. The compact engine is much lighter and situated a long way back in the chassis, so the 52kg weight saving is over the front axle – exactly where it needs to be. This means the car feels more nimble and even more immediate in the way it responds to steering and brake inputs. 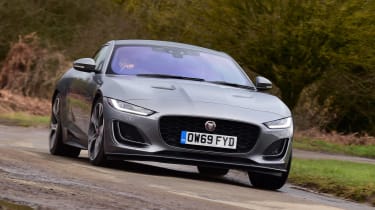 All models have beautifully weighted steering that feels precise and direct, helping you to place the car exactly where you want it in corners. Although there's hardly any body lean, there's enough to ensure the car never feels skittish, but the F-Type can feel a little harsh with an overly hard ride on British B-roads. However, plentiful grip promotes a real feeling of confidence, making high-speed driving on twisty roads something to savour.

Choosing a four-wheel-drive model increases the F-Type’s roadholding limits still further. It grips loose or greasy surfaces tenaciously thanks to technology that can send a varying proportion of power to the front wheels when the rears are losing traction. You may miss the involvement of changing gear, though, as the F-Type is no longer offered with a manual gearbox. There's a standard eight-speed ZF automatic gearbox, which is also used by BMW and Audi, so it should prove reliable.

Enthusiasts were concerned when Jaguar announced plans for a 2.0-litre engine in the F-Type – could it possibly live up to the character, spirit and sound of the V6 and V8? The short answer is ‘no’, but the smallest engine in the range still offers plenty of performance. It will appeal to buyers who like the F-Type’s style but don’t need the power of the V8 and don’t want the higher running costs and purchase price associated with it.

The 296bhp turbocharged 2.0-litre P300 model comes with rear-wheel drive and comes with a ‘quickshift’ eight-speed automatic gearbox. It can get from 0-62mph in 5.7 seconds and go on to a top speed of 155mph. Throttle response is good, it revs freely and doesn’t suffer from turbo lag but it sounds rather flat and doesn’t feel as effortlessly quick as the old V6 F-Types or the current V8s. 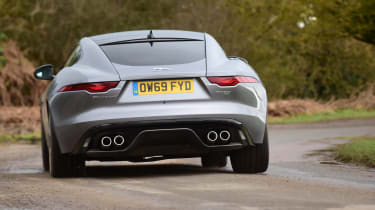 R-Dynamic models do at least have a ‘switchable active exhaust’ that improves the sound of the 2.0-litre. Ultimately, it’s not a bad engine, and the 2.0-litre four-cylinder engine in the Porsche 718 Cayman has come in for similar criticism in terms of its character. We just can’t help but feel that a bigger engine gives the F-Type the overall character it deserves.

V6 F-Type engines have been phased out for 2020 and replaced by a 444bhp version of the V8 that's still far more potent than the old six-cylinder engines were. It’s rear-wheel drive as standard and will do 0-62mph in 4.6 seconds. Buyers can also choose four-wheel drive if they prefer the extra grip but the extra weight makes the F-Type feel a bit heavier and less agile on the move.

The F-Type isn’t quite as quick as the 911 but a V8 growl and distinctive character give it a very different feel to the heavily turbocharged 3.0-litre flat-six in the Porsche, which some buyers will find hard to resist. Its huge 5.0-litre displacement also means the P450 never feels stressed, even when you ask for all of its power.

The F-Type SVR has effectively been replaced by the P575, which uses a 567bhp 5.0-litre supercharged V8. With four-wheel drive as standard, the F-Type P575 gets from 0-62mph in 3.7 seconds and, particularly in its ‘Dynamic’ driving mode, feels even faster than the numbers suggest.