The F-Type convertible is a fairly new car, but Jaguar fares well for reliability

It's too early to say whether or not the Jaguar F-Type will prove a reliable car in the long run, but the company’s solid reputation in our Driver Power customer satisfaction survey should stand it in good stead.

The F-Type hasn’t yet made an appearance in our annual Driver Power owner satisfaction survey, but in 2017 Jaguar finished in an unremarkable 12th place overall out of 27 carmakers covered. Owners generally praise Jaguars for their driver appeal, strong engines and accurate steering. However, 25.6% of Jaguar owners reported at least one fault within the first year of ownership and this contributed to a lowly 24th-place rating for reliability. 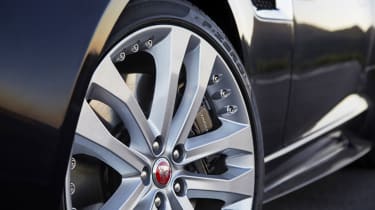 The previous Jaguar XK8 was never subjected to independent crash-testing by Euro NCAP and we don’t expect things to be different for its replacement, the Jaguar F-Type.

We don’t have any fears over its safety, though. It has all the mandatory safety equipment such as airbags, electronic stability control and fixed rollover hoops. Anti-lock brakes are also standard, while the V6 R-Dynamic, V8 R and SVR models get a limited-slip differential, which is a clever bit of kit that improves their cornering grip in the wet.

Safety can also be increased by adding the option of blind-spot monitoring, which can also include traffic-sign detection.