Sports suspension and exhaust are standard across Jaguar F-Type range

It doesn't matter whether you opt for the entry-level 2.0-litre, the V6, V6 R-Dynamic, 400 Sport, V8 R or range-topping SVR – in call cases, the Jaguar F-Type is a joy to drive. Sports suspension and a sports exhaust are standard across the range, while the V6 R-Dynamic, V8 R and SVR get adaptive dampers that you can adjust to your driving style.

In some ways, the entry-level 2.0-litre model is the best deal of all. The four-cylinder engine is only a little less powerful than the V6 and also lighter. The result is that the 2.0-litre is the sharpest, most responsive F-Type of all when you drive it hard on a challenging road.

The steering is well weighted and accurate on all models, while impressive grip levels means you can confidently thread any F-Type through sequences of corners at speed.

That's even more the case with the four-wheel-drive versions, which have an 'intelligent' drivetrain that sends around 30% of the engine's power to the front wheels and only increases that percentage if it detects the rear tyres losing grip. The suspension has also been stiffened slightly at the front to compensate for the increase in weight at that end of the car due to the four-wheel-drive system's components. 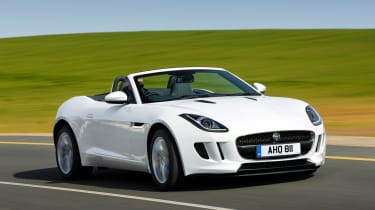 The least expensive F-Type is far from the poor relation of the range. The 2.0-litre, four-cylinder engine develops 296bhp – enough to match the 3.0-litre V6’s 0-62mph time of 5.5 seconds. Not only that, but the 2.0-litre is responsive enough to complement the extra agility that its lower weight brings – even though it’s only available with an eight-speed ‘quickshift’ automatic gearbox.

On R-Dynamic models, you get a Switchable Active Exhaust system, which transforms the sound of the car, adding a rich, bassy rumble to the exhaust. It’s best deactivated for high-speed cruising, though.

The next model up in the range is a 3.0-litre supercharged V6 with 335bhp. Like the 2.0-litre, it’s rear-wheel-drive only, but you can choose a manual or automatic gearbox. It’s arguably the most traditional and approachable model in the range. If you’re keen on some extra power and the choice of four-wheel drive, the V6 R-Dynamic has 375bhp. An even quicker version of the car is available in the form of the F-Type 400 Sport. It’s a limited-edition model on sale for a year only and comes with a 395bhp version of the 3.0-litre V6 engine.

Choose the 5.0-litre V8 engine and the F-Type is transformed from a Porsche 718 Boxster S rival into a semi-supercar that can call the Porsche 911 a sparring partner. The F-Type R has 535bhp, dismisses 0-62mph in around four seconds and can be chosen with four or rear-wheel drive, but the flagship of the range is even more spectacular.

Named SVR, it turns the power up to 567bhp, enough for a 0-62mph sprint of 3.5 seconds and a 195mph top speed. It’s devastatingly fast, but we found this to be a bit of a hindrance in normal driving – there’s never quite enough road to give the SVR its head.

Unless you can get the car on a wide-open race track, you won’t go beyond scratching the surface of its performance. Although it’s true that the four-wheel-drive system deploys the car’s considerable power very effectively and means it never feels quite as intimidating as you might expect, you’ll find yourself either accelerating in short, sharp bursts or driving very gently to maintain smooth progress.

On a circuit, though, the F-Type SVR truly has the measure of a Porsche 911. There’s masses of grip and very fast steering, which – although a little heavier than we’d like it to be – feels very precise. The eight-speed automatic gearbox is good, too, changing gears quickly enough to keep up with the ferocious pace. It does occasionally hesitate when you over-ride its decisions, though – the Porsche PDK automatic gearbox responds instantly by comparison.

We’re inclined to say, though, that despite its incredible power and very thorough engineering, the fire-breathing SVR simply isn’t as easy to have fun in as its more subdued V6 or four-cylinder-powered stablemates. The entry-level model has more than enough power for most and turns every road into a playground.