The Ceed should be an easy purchase based on the remote chances of it going wrong and a pretty strong safety record. Reassuring performances in our Driver Power owner satisfaction survey and a seven-year warranty mean you’re unlikely to be left stranded, or reaching into your wallet unexpectedly.

While this Ceed is an all-new model, built on new underpinnings and with several new engines, we’d be shocked if it's a reliability disaster. Kia has staked its reputation on dependability in recent years and the brand came an impressive second out of 30 manufacturers in our Driver Power survey, three spots ahead of customer favourite Skoda. Of all the respondents, 13.3% told us their Kia had developed a fault within the first year of ownership. 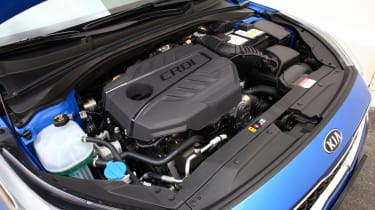 The Kia Ceed came 18th out of 75 models in 2020, with electrical issues cited as the most common gremlin. Drivers particularly praised its practicality, infotainment system and running costs.

Euro NCAP has crash-tested the third-generation Ceed, and it scores four stars as standard. Both its predecessors scored five stars on less stringent tests, and this new car offers the maximum five-star rating if you choose the optional safety pack.

The Ceed is also the first Kia to get lane-following assistance, which not only matches the speed of the vehicle ahead on the motorway, but also detects road markings to help you stay in the middle of the lane.