The Kia Ceed’s turbocharged petrol and diesels are very efficient 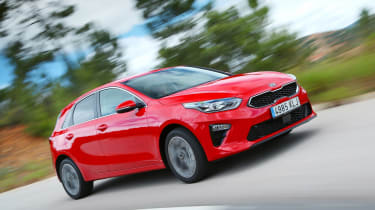 Kia has built its reputation on making cars that are easy and affordable to own and the Ceed sits at the heart of its range. Not only are its petrol and diesel engines economical, but the manufacturer famously offers the longest warranty in the family hatchback class, and it’s now possible to buy servicing plans matching its seven-year duration. Both should help stave off unexpected repair or maintenance bills. 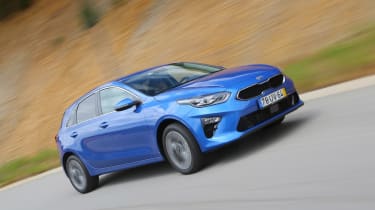 The big news is the availability of an optional ECO Pack, offered on the 1.0-litre petrol and the 1.6-litre diesel engines. This fits an Active Air Flap in the grille, closing it off to improve aerodynamics when the engine doesn’t require as much cooling, along with drag-reducing cladding fitted to the underside of the car and low-resistance Michelin tyres.

In its most economical guise, the 1.0-litre T-GDi engine can return 50.4mpg and emits 128g/km of CO2, which slips to 47.1mpg and 136g/km on the top trim level. For company-car drivers, this results in higher Benefit-in-Kind (BiK) bands than the Ford Focus and Volkswagen Golf. The manual 1.4-litre T-GDi manages up to 45.6mpg and 141g/km, which may put off company-car drivers as it has a high BiK rate.

If you plan to cover lots of miles, the diesel Ceed could pay off because the entry-level manual manages 60.1mpg while emitting 122g/km. Even the more powerful diesel in the Ceed range achieves 56.5mpg and emits 130g/km with a manual gearbox. Once again, both have comparatively high BiK rates, especially factoring in the surcharge on diesels.

Insurance groups for the Ceed 1.0-litre are 12-13 depending on trim while the 1.4-litre petrol sits in groups 18 or 19. The diesel model is in group 20-21. These groups have crept up somewhat from the previous generation Ceed and are, on average, slightly higher than for an equivalent Volkswagen Golf.

As mentioned above, Kia’s seven-year/100,000-mile warranty is still the longest in the industry, giving owners peace of mind that they won’t have to cover costly repairs for most of the car’s life. And even if you sell your Ceed, the remainder of the warranty is transferable to the next owner, helping to improve resale values.

In April 2018, Kia launched a new servicing scheme called Kia Care that allows customers to buy a set number of services to cover maintenance for up to five years. Covering the Ceed’s servicing for three years costs from around £400 and for five years from £750. Once over three years old, Kia can also add MOTs to a service for £35.