The Kia Optima SW isn’t a class leader in this area, but it’s not ruinously expensive to run, either 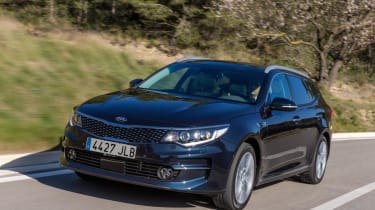 Kia’s 1.7-litre diesel engine is a reasonably efficient modern diesel, but it’s no longer the latest and greatest. This is reflected in the fact that the Optima SW can’t quite match some of its rivals when it comes to fuel economy and CO2 emissions figures – although it’s still pretty cheap to run as far as big estate cars go.

The headline figures for the Optima SW are 64.2mpg fuel economy and 113g/km CO2 emissions. Those numbers apply to the manual-gearbox car; if you specify the ‘7DCT’ seven-speed dual-clutch automatic transmission, economy drops to 61.4mpg and emissions rise to 120g/km. One thing the automatic does have in its favour is a drive mode selection function, allowing you to pick from Normal, Eco and Sport modes to prioritise efficiency or performance as desired. 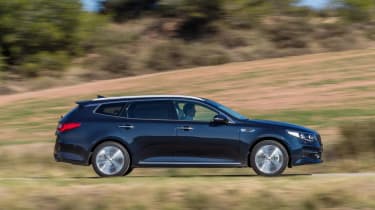 While that all sounds reasonable in isolation, some rivals do better: the Volkswagen Passat Estate (with a 1.6-litre TDI diesel engine) manages 71mpg, rising to 76mpg for the BlueMotion version. Unsurprisingly, the Passat’s close cousin the Skoda Superb Estate and its equivalent ultra-efficient version (the GreenLine) manage almost-identical figures.

Specific insurance ratings for the Optima SW estate haven’t been released yet, but the Optima saloon falls into groups 19 and 20, and this more practical version shouldn’t be too far off that.

Always a trump card for Kias, the brand’s seven-year/100,000-mile warranty is standard on the Optima estate, giving you unrivalled peace of mind and (as long as you don’t cover huge mileage) a useful selling point when the time comes to sell or trade-in.

The Optima requires servicing every 20,000 miles or 12 months – whichever comes first. Kia offers a pre-paid service plan called Care-3, allowing to pay for three services up front for a flat fee of £329, or five services for £609 (Care-3 Plus).