The big Kia has a comfortable, sophisticated feel 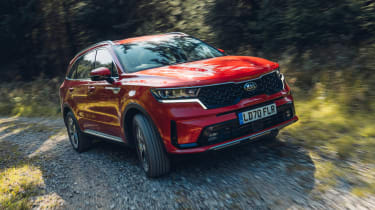 The latest Sorento has a new monocoque chassis, and while the SUV is only 10mm longer overall, there's now a bigger gap between the front and rear wheels. This longer wheelbase makes the Sorento feel even more stable to drive, and Kia has also improved the way it steers. While the older car felt rather vague, the steering in the new car has more weight to it, giving it a more accurate feel as you turn in.

Tackle some bends, and the Sorento feels stable and secure for a seven-seat SUV, but Kia has made the suspension quite firm to keep its mass in check. It's a shame, because most buyers in this part of the market would probably prefer extra comfort over some extra handling prowess. Kia has also updated the 'terrain mode' system, allowing the driver to choose settings for driving on snow, mud and sand, should those conditions arise.

While the 2.2-litre diesel engine may seem like a carry over from the old Sorento, it has been thoroughly redeveloped, with an aluminium cylinder block and other new parts that reduce its weight and improve performance. It now has 199bhp and 440Nm of pulling power, so despite the Sorento's hefty weight, it can get it from 0-60mph in a respectable 9.1 seconds.

The diesel is also paired with four-wheel drive and a new eight-speed dual-clutch automatic gearbox that's now a 'wet' clutch design for smoother shifts. It feels like a good match for the Sorento, and there's almost no diesel clatter when starting the engine or under acceleration.

The Sorento Hybrid is fitted with a 1.6-litre turbo petrol engine and a 59bhp electric motor, giving it a combined total of 226bhp. It's mated to a six-speed automatic gearbox and 0-60mph takes 8.7 seconds, making the hybrid slightly quicker than the diesel at full acceleration.

From a standstill the extra pulling power provided by the electric motor is instantly noticeable. The Sorento certainly feels quick enough for a big SUV, with the petrol/electric powertrain offering ample power for getting up to speed on motorways; it should be enough to satisfy buyers looking for a diesel alternative. However, the 1.6-litre petrol engine can sound rather strained if you ask for lots of acceleration and it reaches the top of its rev range. 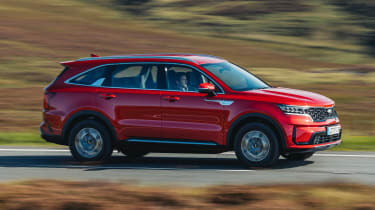 When driving in town, running on electric power is possible if you’re gentle with the accelerator. The only noise is a faint whirring from the electric motor and some noticeable tyre rumble. When the petrol engine starts up the transition is refined and quiet, and the six-speed automatic gearbox is well-suited to the PHEV powertrain, with smooth gear changes during normal driving.

Despite the battery and electric motor increasing the car’s weight, it feels secure when cornering thanks to good body control. The suspension absorbs the majority of cracks, lumps and potholes in the road too.

A plug-in hybrid is also expected to join the range, and while full details aren't yet known, it's likely to have a more powerful electric motor and larger battery pack, giving it around 265bhp and an electric range of up to 40 miles.