"If you need a large SUV, the Kia Sorento is a good choice, with seven seats, a huge boot, an impressive diesel engine and classy interior"

With Kia's range of cars rapidly expanding, the Sorento retains the top spot and acts as big sister to the popular Kia Sportage SUV. The Sorento is a large, seven-seat SUV aimed squarely at winning sales from the Land Rover Discovery Sport, Nissan X-Trail and Hyundai Santa Fe. While the Kia Sorento name has been around for well over a decade, its maker has engineered it to sell on desirability, rather than simply impressive value for money.

Fortunately, today's Sorento is a big step forward in quality, design and performance compared to its predecessor – a car that was both less distinctive and less distinguished. It has evolved into a truly eye-catching machine, from its chrome-studded grille to its elegant side profile. Range-topping GT-Line S models are even more showy, with diamond-cut 19-inch wheels and LED lighting all round. It's set to undergo another transformation in 2020, with the launch of the fourth-generation Sorento.

The best large SUVs you can buy now

With such fierce rivalry in the large SUV market, no car can afford to be complacent, and the Sorento gets off to a good start in the battle for showroom appeal. This continues on the inside, where the design is tidy and up-to-date and materials are certainly more tactile and attractive than in Sorentos of the past. It's no match for an Audi Q5 when it comes to sheer quality, but it's a lot less expensive to buy and only really let down by the cheap plastics you'll find if you really search for them. 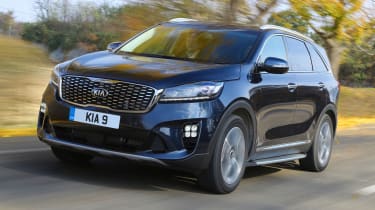 The KX-3, GT-Line and GT-Line S are even more opulent and the latter two bring a more aggressive exterior look with 19-inch wheels and sports styling. They can't match the entry-level models for value, though, and the near-£43,000 price-tag of the GT-Line S puts it up against some pretty prestigious rivals.

Few of those will equal the Sorento for interior space though – the sixth and seventh seats are rather tight for adults but are much more usable than those in the Volkswagen Tiguan Allspace or Skoda Kodiaq. Those seated in the front two rows will have no cause for complaint, and the boot is generous, too – although it shrinks somewhat if you use all seven seats. 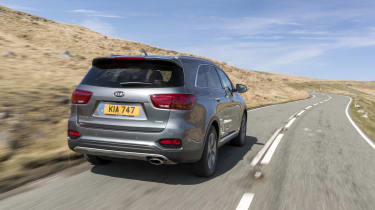 Every model is powered by a 2.2-litre diesel engine. It produces 197bhp, which is good for 0-62mph in 8.7 seconds with the six-speed manual gearbox, or 9.1 seconds with the smooth eight-speed automatic. It's never what you'd call eager, though, and you'll get no more than around 41.5mpg. Emissions levels are higher than the class leaders.

It's relatively quiet on the move, though, and comfort is one of the Sorento's chief selling points. Though the engine can kick up a fuss if worked hard, the Kia is a pretty relaxing car to travel in. It doesn't have much to offer the enthusiastic driver – its bulk and weight make it cumbersome in corners, although it doesn't lean into bends too badly and offers the reassuring grip of four-wheel drive.

The word 'reassuring' is actually key to the Sorento's appeal. Not only does it feel safe and secure on the motorway, but its Euro NCAP five-star crash safety rating bodes well should the worst happen. There's a seven-year/100,000-mile warranty, too, and the Kia Sorento came first out of the top 75 models in our 2020 Driver Power owner satisfaction survey.

The Sorento SUV is one of Kia's best cars. We reckon the top models are a bit too pricey to recommend – even though they're loaded with features. But if you stick with the lower models in the range you'll enjoy a family car that offers an impressive blend of value and versatility, without lacking style or substance.