The Kia Sorento is arguably more practical than all but the biggest MPVs. It offers seven seats, but fold them away and there’s enough load capacity to rival some commercial vans. Standard four-wheel drive means the Sorento can go where others can't and will have extra grip on snow-covered roads. Also, along with the powerful diesel engine, it helps make the Sorento a very accomplished tow car.

No-one could accuse the old Kia Sorento of being too small, but the current car is even bigger – 95mm longer and 5mm wider to be precise. More importantly for interior room, the wheelbase (the space between the front and rear wheels) has been stretched 80mm. 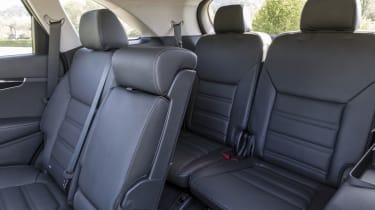 And even though this Sorento is 15mm lower than the old model, passengers enjoy even more head and legroom, as both the front and rear seats are mounted lower down than before. As always seems to be the case with seven-seater cars, the third row of seats is best suited to small children – average-sized adults will find it a bit claustrophobic back there. Access is quite easy, though, thanks to a sliding mechanism for the second row. This can only be operated from the left-hand side, though.

Big doors make getting in and out of the Sorento a doddle, and the middle row of seats can slide well forwards to make accessing the third row easier. Storage areas include two big cubbyholes and two cup-holders up front. Both the front and rear door pockets can hold decent-sized water bottles, and there's a handy USB port so passengers in the second row of seats can charge their phones. The glovebox will swallow a one-litre bottle of water, but nothing bigger.

Keep the third row of seats in place and there's 142 litres of boot space, but folding them down flat into the boot with the tug of a cord frees up 605 litres behind the second row of seats, which can itself slide back and forth and split 40:20:40. Tie-down points help keep loose items in place. 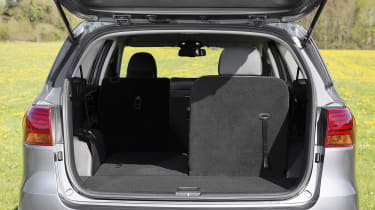 The second row of seats can be lowered flat using two levers in the side of the boot, revealing 1,662 litres of luggage space. That's 18 litres less than the Hyundai Santa Fe can manage, but enough for most large objects. The boot's square opening helps you make the most of the massive space on offer and the lip is relatively low – although the car itself sits relatively high, of course. A new automatic tailgate function will open the boot when you approach the car with the key in your pocket – as long as this function has been activated.

Like the old Kia Sorento, the current model can tow up to 2,500kg, but automatic versions are restricted to 2,000kg. That's roughly 1,000kg more than a normal family hatchback can manage, making the Sorento ideal for caravan or horsebox owners. A tow bar costs £339 and the associated wiring costs another £337.