The Sorento's electric power steering saves fuel compared to a hydraulic system, but it also robs the steering of feel. We found it to be too light, making it hard to judge when you're reaching the car's limits. But if you trust the grip produced by the big tyres, you'll find the Kia can corner quickly with little drama – body lean is kept in check surprisingly well for such a large car. A set of powerful brakes makes light work of stopping, but they also lack feel, making it difficult to slow the Sorento down smoothly and progressively.

Top-specification models come with 19-inch alloy wheels, whose wide tyres give even more grip than the entry-level car's. The downside is that the larger wheels affect the Sorento's ride quality, so the range-topping GT-Line models aren't as smooth on imperfect road surfaces as other cars in the line-up.

The Sorento excels as a comfortable cruiser, so it's at its best when fitted with the eight-speed automatic gearbox. You can add it on KX-2 models and above, and it's standard on GT-Line models. There are five different gearbox programmes available, accessed through a system called drive mode select. GT-Line and GT-Line S models have steering-wheel-mounted paddles to allow fingertip manual changes. It's a little sluggish to change between gears, though – even in 'sport' mode, so the Sorento is far more enjoyable if driven with restraint. 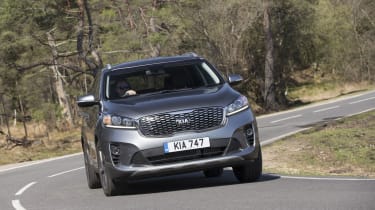 Although there’s only one 2.2-litre, 197bhp engine available, it has enough power to get the Kia from 0-62mph in just 8.7 seconds, or 9.1 seconds for the automatic. Weighing almost two tonnes, the Sorento never feels especially spritely and the engine gets a little noisy when worked hard to get you moving quickly, but there's plenty of mid-range power for safe overtaking on fast A-roads. The power band is a bit narrow, though, meaning you sometimes have to change gear quite frequently to keep the engine on the boil.

Extra sound insulation keeps the engine noise from disturbing passengers, and it only sounds strained when worked hard. A top speed of 124mph means the engine is barely stressed at the UK's 70mph legal limit and it copes well even when fully loaded with passengers and luggage. Tyre and wind noise have also been reduced compared to the old car, making the Sorento perfect for long-distance journeys.