The quality of the Kia Sorento has been improving steadily, and the current model represents another step forward

Kia has put a lot of time and effort into building cars that can match European rivals and this really shows in the Sorento. A classy, sculpted grille hints at what's to come inside and you won't be disappointed when you climb in. There, you'll find a marked improvement in the quality of the materials used, topped off by expensive-looking plastic finishes.

Although this Sorento's 2.2-litre diesel engine is basically the same as the one fitted to the previous model, Kia has added sound deadening to make the car even quieter inside. Push hard and the engine does sound harsh, but few typical owners are likely to thrash the Sorento regularly enough for this to become an issue.

The Sorento's raised suspension gives you an excellent view of the road ahead and the driver's seat and steering wheel offer lots of adjustment, making it easy to get comfortable. The top-of-the-range model's all-round camera display makes it easier to manoeuvre safely at low speeds, while an automatic parking system takes the pain out of reversing into tight spaces. If you want the most comfortable ride, avoid the high-spec models with 19-inch alloy wheels – they provide a rather firm ride when driving over rough surfaces. 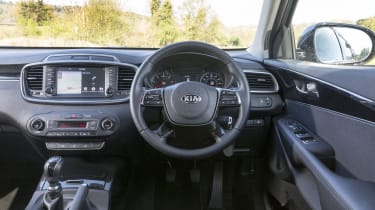 The Sorento was the first Kia to have been scrutinised by the company's new quality-control centre in Korea – and it shows. Most of the car's interior plastics are soft to touch – some hard plastic door pockets being the only exceptions we could find. The plastic surrounding the gearknob does feel a little scratchy and even on our test drive it showed small signs of wear.

The interior is trimmed with matt black and gloss plastics that are a marked improvement over those of previous Sorentos. The latest model is at least on a par with the Hyundai Santa Fe and doesn't fall far behind the standards of premium models such as the Audi Q7 and BMW X5.

The overall look is more high-tech in the GT-Line and GT-Line S models, which have a configurable seven-inch digital dashboard display in place of conventional instruments.

The large central screen is surrounded by brushed-aluminium-effect plastic, so it looks suitably upmarket, while the buttons are arranged in two neat rows that make the Hyundai Santa Fe's setup seem overly cluttered. The controls are all logically placed and you should get used to where everything is in no time.

The touchscreen uses app-like icons for its sub-menus that are intuitive to use, but the system's graphics aren't as slick as those seen in rivals such as the Nissan X-Trail. The standard sat nav is a seven-inch system that's simple to use when inputting your destination. However, following directions isn't quite as easy, as the order they're given in can be confusing – you read from the bottom to the top of the screen. 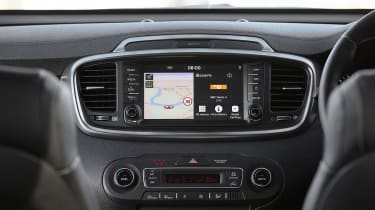 The KX-2 model is our pick of the range, as it's still reasonably priced yet features sought-after kit such as chrome trim, automatic lights and wipers, leather upholstery, heated seats, dual-zone air-conditioning and an eight-inch touchscreen infotainment system with sat nav and a reversing camera. It also has self-levelling suspension, which is very useful if you're towing or carrying heavy loads with your Sorento, but you can save £500 by removing this if you don't want it.

The range-topping GT-Line S adds ventilated front seats, adaptive cruise control, a 360-degree camera system and blind-spot warning, as well as autonomous emergency braking. However, it pushes the Sorento through the £40,000 barrier and we reckon cheaper models offer better value.

In common with other Kias, the Sorento doesn't have much of an options list – you simply pick the trim level with the features you want. You can choose to delete the self-levelling suspension from the KX-2 model and above if you don't intend to tow or carry very heavy loads with your Sorento.