Compared to some rival crossovers, the Stonic feels reasonably agile to drive. This is thanks to its relatively firm suspension, which helps to contain body lean in corners. However, it may be nimble on its wheels, but there's not a huge amount of pleasure to be had driving it.

The steering is overly light and lacks any real feel, while the car seems nervous, fidgeting on any imperfect road surface and lacking the composure of models like the SEAT Arona. It's a shame, because the Stonic's firm suspension delivers neither enjoyable handling nor a particularly comfortable ride. Most rivals are able to strike a better balance between the two.

Despite its SUV styling, the car isn’t available with four-wheel drive, as Kia says only around one in 13 buyers of cars in the Stonic’s class ever actually choose it. 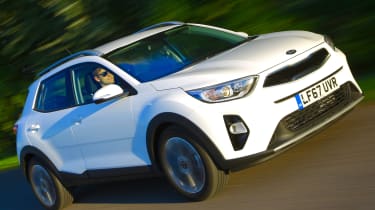 Given the turbocharged 1.0-litre petrol engine is both more powerful and more efficient than the now-discontinued 1.4-litre petrol, it’s not surprising that Kia axed the latter The 1.0-litre petrol produces 118bhp and gets the car from 0-60mph in a respectable 9.9 seconds (compared to a lethargic 12.2 seconds for the old 1.4-litre engine).

The 1.0-litre petrol is quieter and more responsive than the diesel, too, which makes it our pick of the engines on offer. It's a touch rattly when you first start it up, but settles down at cruising speed, while the six-speed gearbox is rarely anything than slick and effortless between gears. There’s a seven-speed dual-clutch automatic gearbox option (on all but the ‘2’ trim), which is a good choice if you need an auto or spend lots of time in stop-start traffic.

The 1.6-litre CRDi produces 113bhp and claims a 0-60mph time of 10.5 seconds. While it’s got noticeably more pulling power than the petrol engines, it just isn’t as fun to use as the 1.0-litre turbo and is prone to an intrusive droning noise at cruising speeds.