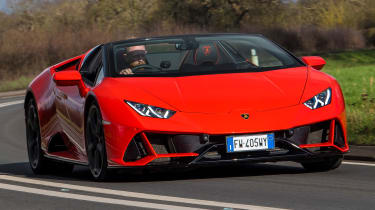 The Lamborghini Huracan Evo Spyder is a car for people who look at the coupe version and want more: more thrills, more noise and, arguably, more attention.

The 'Evo' part of the name was added to the Huracan when the car was facelifted in 2019. A range of changes included sharper bodywork, more downforce, a titanium exhaust system, rear-wheel steering, a new infotainment system and, most importantly, the 631bhp V10 engine used in the Performante model of the previous Huracan.

This 5.2-litre V10 engine, also found in the Audi R8, is absolutely central to the Huracan Evo's appeal; it will get the car from 0-62mph in 2.9 seconds and on to a top speed of 202mph, but the way it sounds is as impressive as the performance. The raucous howl from the exhaust with the car in its most aggressive driving mode under full throttle is like an old Formula 1 car. There's virtually nothing on the market that sounds as dramatic and exciting, perhaps with the exception of a Ferrari 812 Superfast.

Lamborghini charges about £20,000 more for the Spyder over an equivalent Huracan coupe. In the world of supercar ownership, that’s the cost of a couple of optional extras - some of the paint choices, for example, are almost £10,000 each.

The Huracan Evo Spyder’s on-paper running costs are high, with fuel economy pegged at 19.9mpg. Drive it with enthusiasm and that figure will comfortably plummet into single figures.

After the first year's CO2-based road tax (generally included in the on-the-road price), the Huracan will cost £145 a year to tax, but as it costs over £40,000, it’ll be liable for a £320 surcharge from years two to six, bringing the annual bill to £465 during that period.

While fuel economy and road tax are undoubtedly expensive, the big bills are likely to come when insurance and maintenance are required. Expect four-figure quotes from garages, tyre shops and brokers alike.

Drop the roof, floor the throttle and you’ll immediately understand the Spyder’s appeal

As a naturally aspirated (non-turbocharged) supercar, the Huracan is part of a dying breed: more and more supercars feature turbochargers in order to meet efficiency targets; as a result, the free-revving nature, linear power delivery and acoustic character of naturally aspirated supercars are becoming ever-more special and sought-after.

The 631bhp 5.2-litre V10 engine in the Huracan Evo is simply a masterpiece, and taking it all the way up to the 8,500rpm redline is hugely addictive. The engine gets the Huracan Spyder from 0-62mph in 2.9 seconds and on to a top speed of 202mph, but prodding the throttle for any amount of time is a pleasure thanks to the sonorous, visceral noise the engine makes. The seven-speed gearbox is an excellent match for the engine, delivering incredibly quick shifts that seem light years quicker than they did in the Gallardo, the model the Huracan replaced.

The car is so fast and powerful that exploiting the engine's full potential, and that of the car as a whole, is essentially impossible anywhere other than a race circuit. Full throttle in any gear for more than a few seconds will have you doing speeds that are very likely to be illegal for the road you're on. 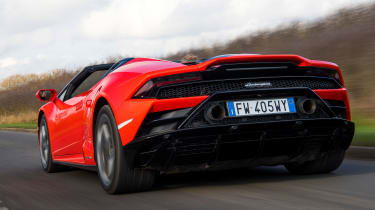 The ride quality is reasonably good when you’re trying to drive gently. Three driving modes affect how the engine’s power is split between the front and rear wheels and they also adjust the way in which the throttle, steering, suspension, exhaust and gearbox behave. Stick with Strada (road) and the Huracan is relatively comfortable, with the damping taking the edges off lumps and bumps in the road. Switch into Sport and the car's responses sharpen up and valves in the exhaust open to make the car louder.

Corsa (race) makes the car razor sharp and reduces the amount of intrusion from the electronics that are trying to reign in the car's wilder side in the other driving modes. The exhaust in Corsa mode is antisocially but gloriously loud, unleashing the intoxicating howl of the V10 under full throttle and emitting comically savage gunshot-esque pops when you shift down a gear.

It used to be something of a given that replacing a fixed metal roof with a folding fabric one led to a significant decrease in stiffness and thus compromised a car's handling. Improvements in structural technologies mean the Spyder doesn’t suffer from this problem (although it is around 100kg heavier than the coupe) and feels just as enjoyable to drive as the standard car.

The Huracan changes direction impressively, thanks to the four-wheel steering and a torque vectoring system, and there's barely any roll in corners, especially in Corsa mode. The four-wheel drive system helps provide a vast amount of grip, the limit of which is all but impossible to reach on a public road, but it will also allow for a more playful feel on track in the Corsa setting. The optional carbon ceramic brakes fitted to our test car felt as powerful and consistent as you'd want in a car with this level of performance.

The only notable gripe with the driving experience is the steering, which lacks the feel and feedback you'd get when driving a McLaren. This will only bother real enthusiasts; for the majority of customers, mildly uninvolving steering will be more than made up for by everything else the Huracan has to offer.

The Huracan Spyder looks like a supercar, inside and out

Aside from the removable roof and an extra switch, the look of the Huracan Spyder is identical to the coupe inside, so it’s characterful and dramatic. The starter switch hides under a fighter-jet-inspired flap, the lights and wipers are controlled by buttons on the steering wheel, while reverse gear is engaged by pulling back on a dedicated lever. As for the roof, this can be lowered and raised at up to 31mph, taking just 17 seconds or so to operate.

The addition of the folding roof mechanism encroaches on the cabin, meaning there's less room to move the seats backwards, and choosing the heated 'Comfort' seats with electric adjustability exacerbates the problem because they're thicker. If you're much taller than six-feet, you will want to seriously consider whether you can live with the compromise the Spyder entails; the top of your head is extremely likely to rub against the headliner with the roof up and then peek above the steeply raked windscreen with it down. The cabin is actually very calm with the roof down if you're short enough to have your head below the window line, but otherwise you'll need a hat, a hairbrush when you reach your destination, or a different car. 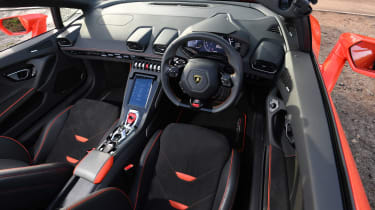 The other main problem with the interior is the seats, which are lacking lower back support. Various people of different sizes from our test team drove the car and all but one found that the lumbar area of their backs were aching after driving the car.

The digital display behind the steering wheel looks great and the infotainment screen has crisp graphics, even if some functions aren't easy to find once you're using it.

Most people will have realistic expectations of how practical a convertible supercar will be and the Huracan can be said to meet these. At 150 litres, its boot is half the size of an average hatchback’s and is located at the front of the car. 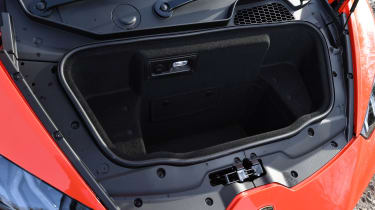 There's even less usable space behind the seats in the Spyder than there is in the coupe but the boot is just about big enough to mean the car is by no means impossible to live with – particularly if you have others in your fleet to lean on when needed.

Feels robust and has VW’s heft behind its development

Small-volume supercars like this tend not to be put through Euro NCAP crash-testing, nor do they generally feature in customer satisfaction surveys. Nonetheless, the Huracan should be as reliable and safe as such cars can be. It was developed in conjunction with the Audi R8 and like that car, has the giant Volkswagen Group behind it. Lamborghini’s four-year/unlimited-mileage warranty is, curiously, more generous than the guarantee you get with a VW Golf.