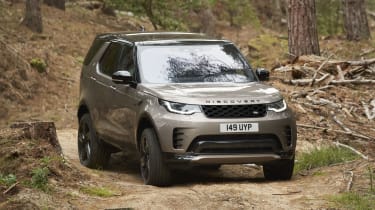 The Land Rover Discovery has been given a minor facelift for 2020. The update consists of a mild restyle, a series of technology updates and the introduction of a revised engine line-up that features mild-hybrid electrical assistance.

The refreshed Discovery will continue its rivalry with a host of seven-seat SUV models, including the Audi Q7, BMW X5 and Mercedes GLE. It’s available to order now with prices starting from £53,090.

The new Discovery features minor styling tweaks, including new matrix LED headlights, a new front bumper that features redesigned air intakes, and a body-colored insert. The rear bumper has also been redesigned, along with a new set of tail lights. The off-set rear number plate remains but now features a new black surround. 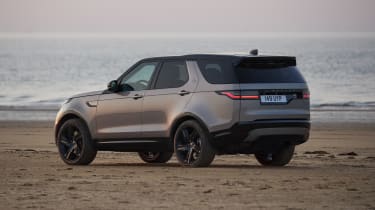 Buyers can also pick from a range of new alloy wheel designs, ranging from 20- to 22-inches in size.

Inside, the refreshed Discovery now features JLR’s Pivi Pro infotainment system, which has recently been added to the Jaguar F-Pace and E-Pace, plus the Land Rover Discovery Sport. It includes a new 11.4-inch screen in the centre of the dashboard.

According to JLR, the new screen is nearly twice the size of the one found in the old car and up to three times brighter. The most commonly used applications are now directly accessible from the home screen menu, making it easier to use. The system can also be updated with over-the-air software upgrades. 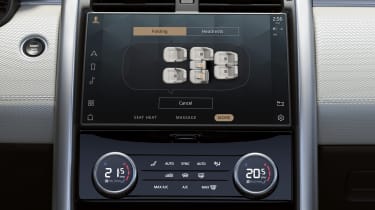 Apple CarPlay and Android Auto are also standard, with items such as a full-colour head-up display and wireless smartphone charging available on the options list.

A sporty R-Dynamic styling pack has been added to the range and can be ordered for S, SE and HSE models. It adds redesigned side vents, gloss black and darkened bodywork trim, and new body-coloured graphics. Inside, two-tone leather-trimmed seats and contrasting stitching feature.

The Discovery’s engine range has been overhauled with a range of four- and six-cylinder petrol and diesel engines. Some now feature 48-volt mild-hybrid electrical assistance. As with the previous generation, every Discovery gets an eight-speed automatic gearbox and four-wheel drive. 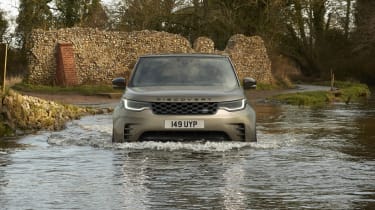 A 300bhp 2.0-litre turbocharged four-cylinder engine is the entry-point in the petrol range, and is badged as the P300. The P360 is powered by a 355bhp 3.0-litre six-cylinder engine, that features mild-hybrid tech.

Both diesel engines are 3.0-litre six-cylinder units with mild-hybrid electrical assistance. The base D250 version produces 247bhp, with the D300 producing 296bhp. JLR says the new diesel-powered DIscovery line-up is capable of towing up to 3,500kg.

For more on Land Rover’s SUV line-up, read our reviews of the Defender, Discovery and Discovery Sport.