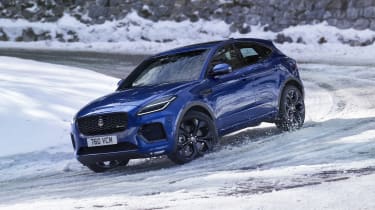 This is the facelifted 2020 Jaguar E-Pace. The firm’s smallest SUV has received a number of updates as part of a midlife refresh, including styling tweaks, a new infotainment system and the introduction of a new P300e plug-in hybrid model.

The new E-Pace is available to order now, with prices starting from £32,575. When it arrives in showrooms, the updated E-Pace will renew its rivalry with small premium SUV models including the Audi Q3, Mercedes GLA, BMW X1 and the Volvo XC40. 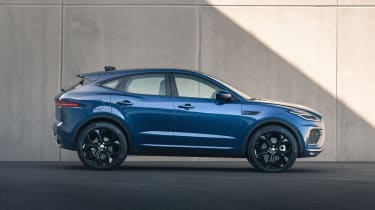 Design changes for the new E-Pace are restricted to a new radiator grille and front bumper, and redesigned LED headlights that feature a similar daytime running light signature to the recently facelifted F-Pace and I-Pace models. The rear gets a revised LED light design with a darker finish than the old car. A new mesh insert has also been added to the lower section of the rear bumper.

Inside, Jaguar has added a new gear selector and a redesigned gearbox tunnel that helps to improve legroom for the driver. Elsewhere, the instrument cluster housing is now trimmed in soft-touch materials.

The biggest change is the new 11.4-inch curved touchscreen, which runs JLR’s latest Pivi Pro system. Jaguar claims it’s easier to use than before, thanks to a revised menu system meaning that up to 90% of its functions can be accessed within two taps of the main menu screen. 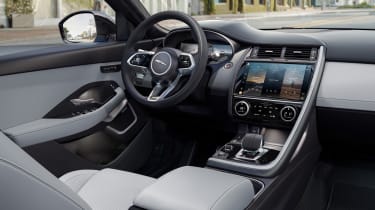 Over-the-air software updates are now also supported, as is compatibility with music streaming apps such as Spotify and Deezer. The 12.3-inch digital dial cluster features enhanced graphics, and is capable of showing full-screen sat nav directions. It works in conjunction with a revised head-up display that now has a larger display area and is brighter and easier to see.

Jaguar has carried over the existing S, SE and HSE trim levels for the refreshed E-Pace. The firm has updated the R-Design trim, which adds a unique front graphic, chrome trim and a darkened finish to the lower bumper. Inside, sports seats, a black headliner, and a sports steering wheel also feature.

A new flagship 300 Sport trim has also been added to the line-up, and is only available with the most powerful petrol engine. It features 20-inch five-spoke alloy wheels, black exterior trim and an electrically powered tailgate. On the inside, a premium Meridian Audio stereo system is standard, along with a suede headline and unique R-Dynamic sports seats, which can be specced from a choice of three upholstery colours.

For 2020, Jaguar has introduced the new P300e plug-in hybrid powertrain to the E-Pace’s engine line-up, while reducing the conventional petrol and diesel engines down to three apiece.

The flagship PHEV model combines a 1.5-litre three-cylinder petrol engine that powers the front wheels, an electric motor on the rear axle, and a 15kWh battery to produce a total output of 305bhp. Up to 34 miles of range is promised on a full charge, as is fuel economy of up to 141mpg. Additionally, the PHEV also offers brisk performance, with 0-62mph in 6.5 seconds and a top speed of 134mph. 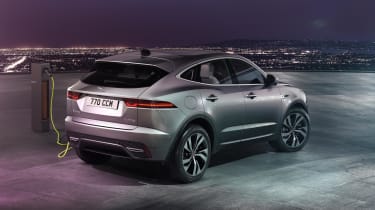 Every diesel is a turbocharged 2.0-litre four-cylinder engine, with the entry-level 161bhp version getting a six-speed manual gearbox and front-wheel drive. The same engine is also available with mild-hybrid electrical assistance, and comes with four-wheel drive and a nine-speed automatic gearbox.

A 201bhp version is also available, which again features four-wheel drive and the same nine-speed automatic with mild-hybrid electrical assistance. According to Jaguar, the range-topping diesel can achieve up to 43.9mpg under the WLTP cycle and a 0-62mph time of 8.4 seconds.

The E-Pace’s petrol engines are also turbocharged 2.0-litre four-cylinder units, with 196bhp, 246bhp and 296bhp power outputs. All three engines get a nine-speed automatic gearbox, four-wheel drive and mild-hybrid electrical assistance. Full details of performance and economy for the petrol engines are expected to be confirmed in the coming months.

Read our full review of the Jaguar E-Pace here, and why not check out our picks for the best small SUVs on sale. 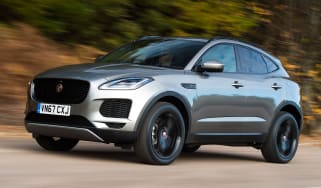