The Lexus ES is best when driven at a relaxed pace, where its refinement shines through

There’s just one engine available for the Lexus ES – a 2.5-litre, four-cylinder petrol allied with an electric motor and a nickel-metal hydride battery pack. In total, it produces 215bhp and a new hybrid control computer is said to better mimic the feel of a traditional petrol engine. Acceleration from 0-62mph takes 8.9 seconds, so the ES is outpaced by most of its rivals, and it also has a modest 112mph top speed.

Unlike the rear-wheel-drive BMW 5 Series and Mercedes E-Class, the ES is front-wheel drive, making it more similar to some versions of the Audi A6 to drive. The chassis feels well sorted, with suspension that soaks up bumps nicely without allowing the body to wallow through bends and steering that's quite direct. 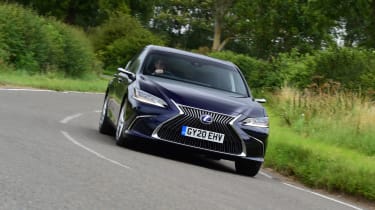 But keen drivers are still unlikely to flock to the ES, because while the hybrid system is better than ever, it’s at its best when driving gently. Do so and it’s smooth and refined, but push harder and the ES doesn’t feel like it has quite enough grunt for a car of its size and weight. Paddles behind the steering wheel allow you to choose from six programmed 'steps' in the CVT gearbox, but it still doesn’t feel like being completely in control of what’s happening between your right foot, the engine and front wheels.