Low emissions should encourage business users to make the switch

Lexus and parent company Toyota have committed to phasing out diesel engines and the ES is only available as a hybrid in the UK. This sets it apart from popular rivals like the BMW 520d and Mercedes E 220d, and could give company-car drivers a reason to switch to petrol power. 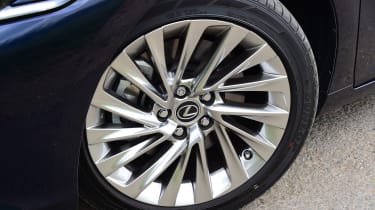 Fuel-efficiency ranges from 48.7 to 53.2mpg according to the new WLTP protocols, with the entry-level version producing just 119g/km of CO2 emissions. This results in a low BiK band, while CO2 climbs to 128g/km for the highest-emitting trim level.

You’ll pay £140 a year in road tax for the ES (£10 less than a conventional petrol or diesel), while versions costing more than £40,000 including any options will incur a £325 surcharge during years two to six, taking it to £465. Every Lexus comes with a three-year/60,000-mile warranty as standard, and the hybrid system and battery pack is covered for five years.

With just one powertrain, insurance groups for the Lexus ES are dictated solely by the trim level you choose. They start from group 33 for the standard model, increasing to 34 for the F Sport trim and taking a small jump to group 38 for the Takumi. These are roughly in line with equivalent models from Audi and BMW, but lower than the higher-powered versions of the German cars.

The Lexus ES comes with a three-year/60,000-mile warranty, which is fairly standard for models in the executive saloon class. BMW offers unlimited mileage within the same period and, interestingly, parent company Toyota provides a five-year warranty with its mainstream models.

Like other Lexus models, the ES is likely to need annual routine maintenance, alternating between minor and major services. However, thanks to a hybrid powertrain that makes use of regenerative braking, consumables like brake pads and tyres should last longer than for some rivals. It's also reassuring to note that Lexus dealerships score highly for customer care.