These are two particularly strong areas for the Lexus IS

The Lexus IS should be a safe and hassle-free car to own. It gained the full five stars in its Euro NCAP tests, while both Lexus – and the IS in particular – have done very well in our Driver Power customer satisfaction surveys over the years.

A first-place finish for Lexus in our 2017 Driver Power customer satisfaction survey and a generally excellent reputation for building dependabe cars should gives buyers superb peace of mind. In our 2016 results, the IS model itself came fourth out of 150 cars, but it didn't appear in 2017's results for the top 75 models, indicating it could be starting to show its age. Even the seemingly complex IS 300h shouldn’t be a cause for concern though: its electric motor technology has been proven in many Toyota and Lexus models and its batteries are designed to last the life of the car. 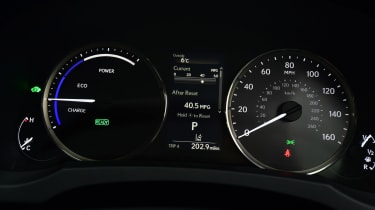 And in the unlikely event that there is a problem, you can at least take solace in the fact that Lexus dealers’ customer service is second to none. Inside, the car’s cabin feels robust, sold and well screwed together, so it should still be looking its best even after several years of ownership. So if you want years of worry-free motoring, you could do a whole lot worse than buy a Lexus IS.

Like many luxury and executive cars these days, the Lexus IS sports a wide range of both standard and optional safety technology to keep you safe in the event of a crash and reduce the likelihood of being invloved in one in the first place. Anti-lock brakes, traction control and stability control are fitted to all models, as well as hill-start assistance and a tyre-pressure warning system. You also get eight airbags, seatbelt reminders, ISOFIX child-seat mounts and a pop-up bonnet for pedestrian protection.

All models, except for the most basic IS 300h SE, are fitted with Lexus Safety System+, a suite of safety systems which makes use of cameras and radar sensors to improve forward vision to warn of hazards ahead. Autonomous emergency braking, a reversing camera, adaptive cruise control, automatic high beam, lane departure warning and traffic sign recognition are all fitted as standard too.

Another feature is Sway Wanting, which monitors the car's lane position and the driver's steering inputs to determine if the driver is losing concentration through tiredness. Should it determine you are, it'll trigger a buzzer and a warning light.

The top-of-the-range Premier model is available with Lexus’ Advanced Safety Pack, which includes a pre-crash safety system that can tighten the seatbelts and apply the brakes if it senses a crash is inevitable, adaptive cruise control that can mantain a safe distance from the car in front, lane-departure assistance that helps you stay in lane on the motorway and headlights that dip automatically if a car is detected coming towards you.