There’s plenty of passenger space in the Lexus IS, but hybrid’s boot capacity is reduced

The Lexus IS broadly equivalent to its chief German rivals when it comes to passenger and luggage space – but note that the entry-level version has no split-folding rear seat. 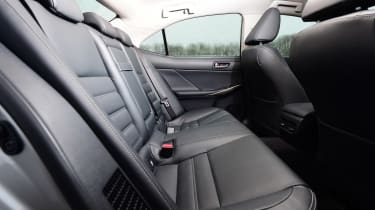 Lexus IS interior space and storage

Compared to its predecessor, the current Lexus IS is bigger overall inside and has thinner front seats, which results in a good deal more legroom for the back-seat occupants, which will be welcome.

There’s also plenty of room for the driver and a passenger up front, as well as plenty of cabin storage, including a box in the front central armrest for keeping essential bits and bobs. The fairly large transmission tunnel running down the centre of the car makes things difficult for the middle rear-seat passenger, however: they’ll struggle to find somewhere for their feet. 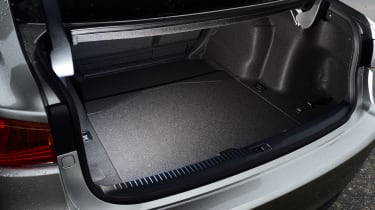 The IS 300h's luggage area measures 450 litres – smaller than what you get in a BMW 3 Series, Mercedes C Class or Audi A4. This is due to the bulky batteries that are necessary for the hybrid powertrain. And if you regularly carry larger or awkwardly shaped loads, be aware that the IS 300h SE isn’t available with 60:40 split-folding rear seats.