"Great to drive, good looking and excellent value, the Mazda6 should be on any family car buyer's shopping list."

Mazda’s 6 is a great all-rounder. Not only is it smartly styled, but it also offers impressive performance, practicality and value for money. Mazda’s cars are renowned for being good to drive, and the 6 is no exception – it’s equally happy being driven fast on a twisty B-road as it is on the school run. Mazda also has a strong record for reliability, and the current 6 has a better-built cabin than the previous model’s. We think it’s a real unsung hero as it also comes generously equipped. In short, the 6 is a capable and enjoyable family car.

There are six engines available in the Mazda6: 1.8, 2.0 and 2.5-litre petrol and three 2.2-litre turbodiesels with 127bhp, 161bhp or 177bhp, so there’s plenty of choice. The petrol engines are capable and the 1.8 is very cheap, but it’s the diesels that suit the 6 best. They each have plenty of punch – especially the most powerful 177bhp version – and they’re all affordable to run. The 6 is a big car, but it doesn’t feel big when you drive it. The steering is light and precise, and there’s plenty of grip, so it’s safe but fun to drive at the same time.

This is perhaps the only area where the Mazda6 falls down slightly. The sporty set-up means that the ride is not quite as comfortable as that of rivals like the Ford Mondeo or VW Passat, although it’s not terrible. There’s also more wind noise than in rivals, but the engines are quiet and smooth, so it’s not all bad.

The 510-litre boot is impressive for a car of this size, and although it’s not quite as large as the Vauxhall Insignia (520 litres) and Ford Mondeo (528 litres), the Mazda’s trump card is the huge amount of space available when the rear seats are folded flat – 1,702 litres in total, which is more than a lot of 4x4s and even some people carriers. The glovebox and door pockets are reasonably sized and there’s also storage in the central armrest, along with cup-holders in the front.

A five-star Euro NCAP crash test rating along with six airbags, stability control, daytime running lights and various other safety features confirm that the Mazda 6 is very safe. There’s also an optional blind-spot warning system that alerts the driver to the presence of cars just behind them on the road. Mazda has long been renowned for strong reliability, and it finished 12th out of 27 manufacturers in the 2010 JD Power Satisfaction survey, which is well above average. The only criticism of the 6 in this area is that the cabin plastics aren’t quite up to the quality of rivals.

Good value for money. TS models are the best

The entry-level 1.8 S model is competitively priced and undercuts rivals like the Ford Mondeo. Top-specification models and diesel engines cost more, but they also represent better value than rivals. Equipment levels are generally good, but it’s best to avoid the entry-level S models, as these are short on equipment and can be difficult to sell on as a result. TS and TS2 models offer the best value, as they come with alloy wheels, cruise control, electric windows and mirrors, climate control and more. Resale values are quite strong, so the Mazda is a safe investment. 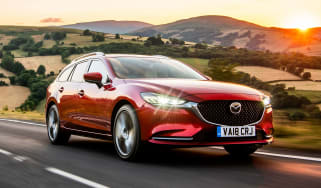