The AMG GT is squat and weight is placed low down in the car for a low centre of gravity, plus it’s split almost equally between the front and the rear. This is important, because it helps the car’s balance when cornering; the last thing you need when hauling 500bhp+ through a corner is an unexpected twitch.

As a result, the AMG GT feels sharper and more alert than any previous model from AMG – including the SLS AMG supercar. When you’re behind the wheel, the AMG GT’s engineering gives total faith in the car’s grip and stability. 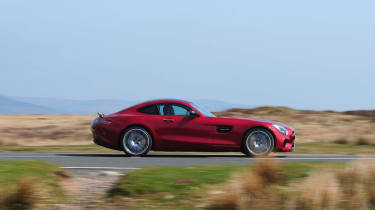 The steering is light enough to make it easy to drive around town but responsive enough for it to shine when you’re on a racetrack. It does occasionally feel twitchy at high speeds and there's more feel through the steering wheel of a Porsche 911, but those issues certainly don't ruin the driving experience.

For all its excellence when you're driving it hard, the AMG GT is still great fun at everyday speeds. If you choose the adaptive suspension on the regular GT (it's standard on the GT S and GT C) and select the comfort setting, the suspension is firm, but not uncomfortable. With that in mind, we’d recommend you choose it if you're buying the ‘basic’ GT. Even so, there's still quite a lot of noise from the wide tyres – which is fun when you're on your favourite road, but can get tiring on a longer motorway run.

The Mercedes-AMG GT's 4.0-litre petrol engine uses plenty of race-car inspiration combined with some fuel-saving technology. Any one of the four variants provides more than enough performance, together with an intoxicating soundtrack. It's undoubtedly one of the best engines available in a car today.

Thumb the starter button and the AMG GT burbles into life, but the sound reaches its crescendo about 3,000rpm. The AMG GT features a button that opens flaps in the exhaust to enhance the noise. But sit at a steady 70mph cruise and the engine burbles away at low revs, although it's noisier than a 911.

The standard Mercedes-AMG GT can cover 0-62mph in just four seconds and reach a top speed of 189mph. If you crave even more speed, the AMG GT S can reach 62mph from rest in 3.8 seconds and head on to 193mph flat-out. Because of the way the engine delivers that power, performance is accessible at any engine speed, allowing you to devour straight stretches of road or make quick overtakes safely.

The GT C model represents a mixture of the standard AMG GT and the track-focused GT R, borrowing the wider body and rear track, active rear-wheel steering and some of the extra power from the latter, while retaining some of the subtelty and usability of the former. The 4.0-litre V8 in the GT C produces 550bhp, propelling the car from 0-62mph in 3.7 seconds and on to a top speed of 197mph.

All AMG GTs are quick in a straight line, but the GT C takes the car's handling to a higher level. The wider rear track makes it feel more planted in corners, giving you the confidence to push harder and the steering is much more direct than in the GT and GT S, with more feel and natural weighting, too. To top it off, the GT C gets a tweaked exhaust system that makes the V8 engine sound even better than it does in the 'lesser' models.

Thanks to the more sophisticated suspension setup used in the GT C, both the ride and steering are markedly improved from the standard GT and GT S models, giving you a greater sense of connection to the road. There are even active aerodynamics to help push the car into the road at high speeds and rear-wheel steering that improves how the car turns into corners.

The automatic gearbox – there’s no manual available – provides seamless gearshifts, meaning there’s no let-up in the ferocious acceleration. Plus, it blips the engine when you change down through the gears, which adds to the drama. The box’s paddles are mounted on the steering wheel.