The Mercedes-AMG GT is a pricey car to run in absolute terms, but compares well with its closest rivals

If you're looking for low running costs, then the Mercedes-AMG GT isn't for you. However, the V8 engine that powers the car is pretty efficient given the performance on offer. That's particularly apparent when you compare it to the wallet-busting bills the old Mercedes SLS AMG racked up.

Given the AMG GT uses a hugely powerful 4.0-litre petrol engine, the on-paper running costs aren't as bad as they could be. The standard car claims average fuel economy of 23.5mpg and CO2 emissions of 261g/km.

Step up to the Mercedes-AMG GT S and you'll find similar figures: 23.3mpg and 262g/km. Not quite as efficient as an equivalent six-cylinder Porsche 911 Carrera S or even GTS, but still respectable. The extra power of the GT C means official economy falls to 21.9mpg and CO2 emissions rise to 284g/km. 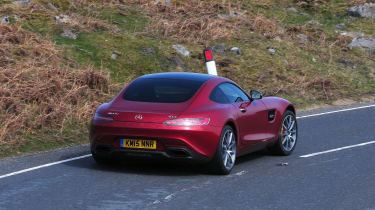 After the first year’s CO2-weighted payment, all AMG GTs cost £145 a year to tax, plus the £320-a-year surcharge for cars with a list price of over £40,000. This higher rate is payable for five years from the first time you tax your car (a year after initial purchase).

As is the way with any car – particularly high-performance models – if you exploit all the available power, you'll find the Mercedes uses fuel at an alarming rate. Don’t be surprised to see the mpg figure regularly fall to a single digit.

The AMG GT is comfortably in the top Benefit-in-Kind (BiK) tax bracket for company-car drivers, making it an expensive choice for anyone lucky enough to have the option.

All four AMG GT models fall into insurance group 50 – the highest there is. That means your insurance premium for this car is guaranteed to be very costly. But it's not alone in being that expensive – the Porsche 911 Turbo and Audi R8 V10 also fall into group 50.

The Mercedes-AMG GT, like every other Mercedes, comes with a three-year/unlimited-mileage warranty and up to 30 years' warranty against corrosion. You'll also receive Mercedes' own breakdown cover.

The Mercedes-AMG GT will need servicing every 12 months or  12,500 miles, which is an impressive length of time for a high-performance car such as this.