The C-Class Coupe is a very good car to drive thanks to new software making the steering heavier and quicker than that of the C-Class saloon. It also provides more feedback, making it more engaging for those who really want to enjoy driving. It’s still comfort-oriented however, so driving enthusiasts will find the BMW 4 Series Coupe sharper but a bit firmer too. 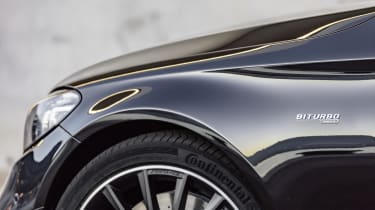 The Airmatic Agility package includes air suspension, adaptive dampers and Agility Select – a system that allows you to choose between Eco, Comfort, Sport and Sport+ driving modes. In the right setting, it makes the C-Class Coupe glide over bumps, as well as allowing you to tweak the setup of the car depending on how you want to drive it.

Mercedes' nine-speed automatic is very smooth and is standard across the range, except on the cheapest C180 model - a six-speed manual is offered here but you can still choose the auto.

The latest C-Class ushered in a 2.0-litre, twin-turbocharged diesel engine that replaced the previous, long-running 2.1-litre. While that engine had no shortage of power, some rivals were a lot smoother, and the 2.0-litre is a huge step forwards. The C220 d’s 191bhp is impressive, too – almost a match for the previous C250d, which is no longer available. The same engine is used in the C300 d, but it’s tuned to 242bhp and gets from 0-62mph in six seconds flat - about a second quicker than the C220 d.

Petrol fans have a choice of three engines in the latest C-Class and the C200 is by far the least conventional. It's a 1.5-litre, four-cylinder petrol that employs 'EQ' mild-hybrid technology to boost power by 13bhp while reducing fuel consumption. The system uses a belt-driven 'starter generator' that allows the engine to shut down when little power is required – even when the car is in motion. It'll also power the car away from a standstill before the petrol engine cuts in. There's 182bhp on hand – enough for a 7.9-second 0-62mph time and 149mph where it's safe and legal to do so. We’d recommend choosing this engine over the entry-level 1.6-litre C180 petrol - it’s about half a second faster to 62mph and is a better fit for the C-Class Coupe. 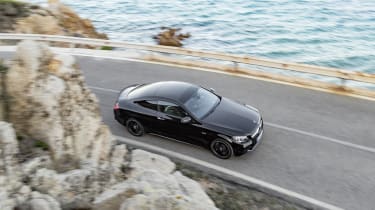 As the C43 has four-wheel drive its towering performance is surprisingly accessible. That makes it a fine choice if you want a swift and smooth means of getting about, but which still offers you a chance to have fun on the twisty route home.