The latest C-Class Coupe employs some clever, fuel-saving technology first introduced on the larger Mercedes E-Class saloon, including the brand's mild-hybrid 'EQ' setup, which uses a 48v power system to provided an extended stop-start capability – the engine can even cut out temporarily when power isn't needed but the car is in motion. This, and other measures, help the C-Class to return reasonable fuel economy in spite of impressive performance figures.

The latest C-Class Coupe has a rather simpler engine range than before; only two diesels are offered. The C220 d uses a 2.0-litre, twin-turbocharged four-cylinder engine that delivers 191bhp and up to 54.3mpg is claimed, with CO2 emissions of 121g/km for cars with the smallest 18-inch wheels. Its Benefit-in-Kind (BiK) company-car tax rating is still quite high, however, due to the extra tax on diesel.

Above that is the C300 d, which still returns 49.6mpg despite hitting 0-62mph in just six seconds. Both the C220 d and C300 d come with the option of 4MATIC four-wheel-drive, and the economy drops slightly on each model with it fitted. The price difference between two- and four-wheel-drive isn’t massive, so it’s a good option if you’d like some extra confidence in poor weather conditions.

The 1.5-litre C200 is perhaps the most interesting engine in the range, with EQ mild-hybrid technology that boosts power and economy. Up to 42.8mpg is promised, which is an impressive figure for a 182bhp petrol car. Add 4MATIC four-wheel drive, though, and economy drops to 40.4mpg. CO2 emissions of 138g/km for the rear-wheel drive version mean a BiK rate of 31%. A 1.6-litre C180 model kicks off the range but the C200 offers the same economy and extra performance, so it’s worth the extra if you can afford it.

It's possible to buy a C-Class Coupe for less than £40,000, and such a car will cost £145 per year to tax. If you tick a few option boxes or upgrade to another engine or trim level, you’ll break that £40k barrier, and the annual road-fund license leaps by £320 – you'll need to pay £465 in the second to sixth year of ownership, but after that, the lower £145 fee will apply. 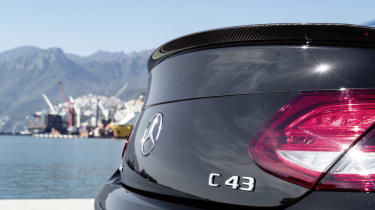 Insuring a Mercedes is never particularly cheap, especially if you buy a coupe, which is inherently more sporty and desirable than its saloon counterpart. Naturally, the entry-level diesel and petrol models will be the cheapest to insure (depending on trim level and engine, they fall into groups 32-42), while the C43 is in group 45 and the C63 S is in the top group 50.

When it comes to maintaining your C-Class Coupe, Mercedes offers various annual servicing options, including two, three and four-year plans that are transferable to subsequent owners, which should help boost the car's residual value when you come to sell it.

Mercedes offers a fairly standard guarantee with its cars: a three-year/unlimited-mileage warranty. This is slightly more generous than the three-year/60,000-mile warranty supplied with the Lexus RC.