The 2.0-litre diesel engine in the E 220 d makes the Mercedes E-Class powerful yet efficient

Every model of E-Class boasts impressive fuel-efficiency considering their engine power. The E 220 d is a good all-rounder for performance and efficiency, while the latest plug-in hybrids are sure to appeal to company-car drivers. AMG versions are searingly quick but also likely to burn a hole in your wallet. 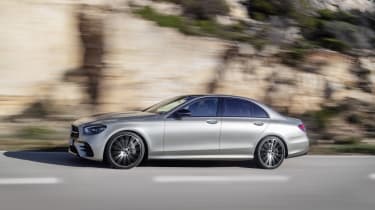 The E 220 d is the most fuel-efficient diesel. Mercedes’ latest 2.0-litre diesel engine claims an official economy of up to 53.3mpg, with the Sport model emitting 139g/km of CO2 giving it a Benefit-in-Kind rating in the higher bandings for company-car users.

If you covet the smooth power of a bigger six-cylinder diesel engine, the E 400 d doesn’t disappoint on either count, but is markedly less fuel-efficient, at up to 42.2mpg. Its CO2 emissions of 176g/km mean it sits in the top BiK banding, too, and insurance will be costlier.

Most economical of all, is the E 300 de plug-in hybrid, with an electric motor and 13.5kWh lithium-ion battery pack, allowing the E-Class to be driven using electricity alone or as a hybrid. Its official fuel-efficiency figure of up to 235.4mpg will depend on how often you can charge and make use of the battery, but its 33g/km emissions place it in a low BiK banding and grant you free access into low emissions zones like the one covered by the London Congestion Charge. If you'd prefer a petrol plug-in hybrid, the E 300 e costs just a few hundred pounds less to buy and should cost around the same to run, with similarly low 37g/km emissions. 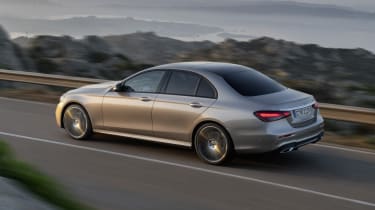 Costing almost £10,000 less to buy, the entry-level E 200 2.0-litre petrol could suit private customers, returning up to 38.7mpg, but emissions of 165g/km place it in a high BiK banding, which will be a big turn off for company-car drivers.

If fuel economy and emissions are less of a priority than performance, the other petrol-powered E-Class is the Mercedes AMG E 53 4MATIC. It’s very fast, boasting a 3.0-litre turbocharged V6 with 429bhp. That’s not the end of the story, either, because unlike the outgoing AMG E43, this is a hybrid ‘EQ’ model with a significant torque boost from its electric motor. This is more for improving performance than fuel-efficiency, though, but you’ll pay for that power with a 29.7mpg fuel consumption and 212g/km CO2 emissions.

Expect to pay a yearly road-tax fee of £150 on E-Class models (£140 for the hybrids), with an additional surcharge of £325 if the list price including optional extras exceeds £40,000. This surcharge is payable in years two to six, making the total amount £475 (£465 for hybrids) during that period.

The Mercedes E-Class is a desirable, relatively expensive car and all models offer impressive performance, so insurance isn’t cheap. Expect models to fall into insurance groups 28 to 49 out of 50 depending on which you engine and trim level you go for.

Mercedes is a luxury brand and servicing them isn’t particularly cheap. The manufacturer does however offer fixed-price service plans and you can pay for these on a monthly basis to take the sting out of the bills. Your local Mercedes dealer will be happy to run through the choices available.

Mercedes gives a three-year warranty on all its cars, with no restriction on mileage. This is exactly the same as you’ll get with the E-Class’ most direct rival, the BMW 5 Series. Roadside assistance is also included.