The exact engine you'll want in your Mercedes E-Class saloon will depend on where the money goes. Those who spend their lives clocking up motorway miles will be happiest in one of the diesels, which have great fuel economy but also good performance. Performance fans with bulging wallets will, of course, want to look at the AMG E63 version, which we’ve reviewed separately. 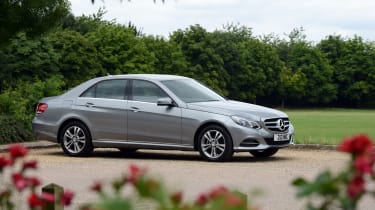 Expect resale values after three years or 36,000 miles to be around 38% for the basic E220 model and 44% for the E350. Paying extra for the AMG Night Edition trim won’t increase the absolute price by much when you sell the car on, so you’ll get a lower percentage of the original value back.

The basic Mercedes E220 BlueTEC diesel E-Class returns fuel economy of 64.2mpg and CO2 emissions of 114g/km for road tax of £30 a year. The more powerful E350 BlueTEC manages 54.3mpg. The petrol model is more expensive to run – the E250 can be expected to return 47.9mpg and emit enough carbon dioxide to cost you £130 a year.

Do bear in mind that in order to meet strict Euro 6 emissions regulations, BlueTEC models will need topping up with AdBlue, a fluid that helps remove pollutants from the car’s exhaust gases. This should be taken care of at service time, though high-mileage drivers may need to replenish their AdBlue tanks in between services.

The E-Class won’t be cheap to insure, with most models falling into insurance groups 33 to 43. The more powerful models are in the region of group 45. In comparison, the BMW 5 Series saloon, which offers buyers a wider range of engines, falls into groups 30 to 41 for its various 2.0-litre models, with its 3.0-litre engines lying in groups 42 to 45. The Jaguar XF’s 2.2-litre and 3.0-litre engines have similar ratings. 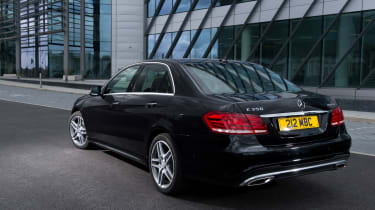 The Mercedes E-Class saloon comes with a warranty that covers you for unlimited miles during the first three years of ownership – exactly the same as what’s offered by BMW on the 5 Series.

Mercedes offers fixed-price service plans across its range, starting from £24 a month – that’s for two services over two years.