Rear-seat passengers in the Mercedes E-Class saloon have loads of head and legroom, while storage inside is decent

In theory, at almost five metres long, the Mercedes E-Class isn't a car for the nervous parker. But all models get Active Parking Assist, which uses sensors all around the car to find a suitable parking space, then moves the car into the space automatically at the push of a button – leaving you to just operate the pedals.

Four people will fit inside the E-Class with ease, and five is possible with a little compromise. Access to the rear is easy and better than the previous model. The boot is a good size, and there’s enough storage in the cabin, too.

The Mercedes is a big car and there's space inside for five people, although the person in the middle seat in the back draws the short straw because of the large transmission tunnel that sits between their legs. This is something that rivals suffer from, too, however.

All passengers, bar the one in the middle rear seat, should have plenty of head and kneeroom – and the two outer passengers in the rear can fit their feet beneath the front seats, which are slightly raised off the floor. The driver’s seat offers lots of adjustment, so getting comfortable should be easy.

Storage areas include a large glovebox, map pockets on the back of the front seats and decent-sized door bins. There’s some additional storage in the central console, too, because the controls for the automatic gearbox are on the steering column instead. 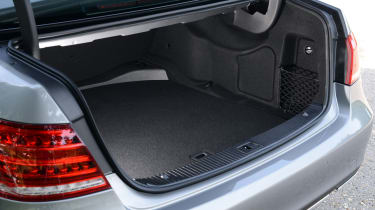 The E-Class also has a good-sized boot that holds up to 490 litres of luggage, as well as coming with useful load nets and hooks. Need more space for bulky items? Many people will be surprised to discover that 60:40 split-folding rear seats are an extra-cost option.

If that doesn’t seem enough, you may want to consider the Mercedes E-Class Estate instead. This offers a massive 695-litre boot, with a class-leading 1,950 litres if you fold the rear seats down.

Rivals offer varying amounts of space. The BMW 5 Series manages 520 litres, while the Lexus GS and Jaguar XF have roughly the same amount as the E-Class. The Audi A6 comes out on top, with 565 litres. All these boots offer enough space for several large suitcases or sets of golf clubs.