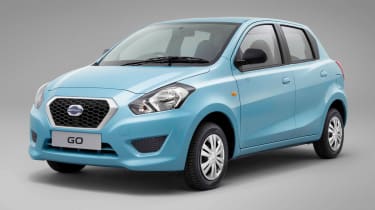 Nissan has confirmed it is set to revive the defunct Datsun name badge in 2014, as a rival to budget brand Dacia.

The all-new Datsun GO supermini will be built in India and go on sale there early next year. Unfortunately, Nissan has no plans to launch the car in Europe – deciding to focus on emerging markets to begin with.

That said, if the Dastun brand is successful across the globe, there should be no reason why we won’t see the brand take off in the UK, too. After all, Dacia has been selling cars in mainland Europe for several decades.

The Datsun GO will get a 1.2-litre petrol engine with a five-speed manual gearbox. It’ll be very similar in size to the current Nissan Micra, with a decent-sized boot and room for five passengers. Performance and economy figures have not been confirmed, but it is likely to do at least 55mpg.

Although standard equipment is set to be quite basic, Datsun has confirmed that all cars will feature a built-in mobile phone docking station. This is an impressive feature, given that the basic Dacia Sandero doesn’t even come with a radio.

Carlos Ghosn, Nissan’s CEO, said: “This is an historic day for Nissan Motor Company and for our customers and partners in some of the world’s fastest-growing markets. It’s also an exciting moment for many women and men here in India who – today – come one step closer to realising the dream of purchasing a car.”