The Dacia Duster Black Edition will go on sale later this year, priced from £17,575 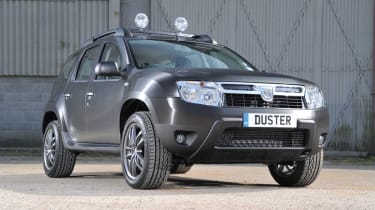 The Dacia Duster Black Edition will be available to buy, following overwhelming interest in the special-edition model the Goodwood Festival of Speed this month.

Following the car’s appearance at the Festival of Speed, Dacia has decided to put the special edition on sale for UK buyers. Based on our 2013 CarBuyer Car of the Year, it will cost £17,575, and boasts a long list of standard equipment.

The Dacia Duster Ambience Black Edition gets a unique black vinyl wrap instead of conventional metallic paint, as well as a leather interior, hi-tech Kenwood stereo and 18-inch alloy wheels. Also included is a six-inch Garmin sat-nav screen, digital radio and Bluetooth connectivity. USB and iPod connectivity are standard, too.

All Black Edition models come with the 109bhp 1.5-litre dCi diesel engine, but are only available with two-wheel drive. That means all the equipment listed above and shown in the photos is for show rather than go.

However, thanks to the frugal dCi diesel engine, the Duster Black Edition will return 56.5mpg and emits just 130g/km of CO2. It’s got a decent 475-litre boot, too – bigger than what you get in both the Nissan Qashqai and Peugeot 2008 crossovers.

Priced at the top of the Dacia range, the Duster Black Edition is £2,580 more expensive than the previous top-spec Duster Laureate dCi model and a whopping £6,080 more than the current Duster Ambience dCi. The Laureate model even comes with four-wheel drive for those needing some light off-road ability.

We awarded the Dacia Duster our coveted CarBuyer Car of the Year 2013 award, thanks to its unrivalled value, practicality and low running costs, but this new special edition focuses more on style than rock-bottom list prices and sparse equipment lists.

Available to order now, the first Duster Black Editions will arrive in October.