New specifications for the Citroen C1 have been revealed, priced from £9,760 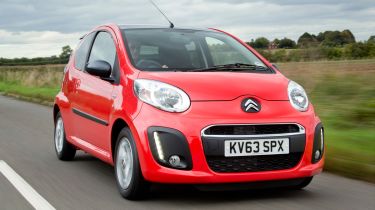 The Citroen C1 range has been lightly revised with two new specifications, in an effort to give the ageing supermini fresh appeal. That means along with the existing VT, you can now buy a Citroen C1 Edition and a Citroen C1 Platinum model, too.

The range is priced from £8,095, for the three-door VT, through to £11,245 for the five-door Platinum fitted with the ETG automatic gearbox. It’s worth noting that Citroen showrooms are known for offering generous discounts, though.

The basic VT model gets power steering, a host of safety features and a 12V plug to charge electrical equipment such as sat-navs and mobile phones. The Edition specification, which is priced from £9,760, adds alloy wheels, plus a leather-trimmed gear knob and steering wheel.

In an attempt to compete with cars like the Volkswagen up!, the Citroen C1 Premium model (priced from £10,345) offers a styling pack that includes a grey roof, grey rear spoiler and grey wing mirrors, plus front fog lights. Inside, it gets shiny black interior details, dark-tinted rear windows, Bluetooth phone connection and a USB port.

All C1s are fitted with a 1.0-litre petrol engine that gives 65.7mpg (62.8mpg with the automatic gearbox), a 0-60mph time of 13.7 seconds and a top speed of 98mph. With a willing engine, the C1 feels faster than it actually is, and doesn’t make too much noise at motorway speeds. Nippy handling also means it is fun to drive, while its small dimensions make for easy parking.

Unfortunately, the Citroen C1 (along with the near-identical Peugeot 107 and Toyota Aygo) was downgraded by Euro-NCAP last year – and can only manage three stars for crash safety. Compare that to the five-star VW up!, and things don't look too rosy. The up! costs around £1,000 more than the Citroen, but that could be a price worth paying thanks to the fact the up! gets a more modern interior and fresher looks. Also worth a look are the Skoda Citigo and the Seat Mii – both use many of the VW’s parts, but have lower list prices.