“The Peugeot 107 provides cheap-to-buy and cheap-to-run transport for city dwellers. It makes an ideal first car.”

Having been developed alongside the Citroen C1 and Toyota Aygo, the Peugeot 107 has similar virtues to those cars. It’s all about simplicity and utility – everything you need to go motoring; no frills, fewer sills and very cheap to buy and run.

There was only ever one engine to choose from – a 1.0-litre, three-cylinder petrol that produced a whole 67bhp. You were never going to break any land speed records with one of these, but it proved to be a reliable engine – unsurprising, given its Toyota origins – with enough oomph for driving around town and the occasional foray onto an A-road or even the motorway (if you were feeling brave).

In keeping with its limited power – 0-62mph took around 14 seconds – the 107 was a very cheap-to-run car, returning around 66mpg and emitting just 99g/km of CO2, making it free to tax. That small engine also means the 107 is one of the cheaper cars to insure – particularly for young drivers.

You can have your 107 in a choice of four trim levels – Access, Active, Allure and Envy – none of which come particularly well equipped, but you should be able to find one on the used market that’ll fit your requirements.

Thanks to the 107’s popularity as a new car, used prices have remained pretty strong – a decent three-year-old example still costs around £3,000. Go a little older, however, and £1,500 should be enough.

Practicality isn’t one of the 107’s strong points, however. The boot is tiny and there’s not much space in the back seats for adults. There are some issues in terms of safety, too. Euro NCAP crash-tested the car in 2012 and awarded it just three out of five stars – a poor score in this day and age.

Toward the end of the 107’s life as a production car, it became seriously outclassed by rivals like the SEAT Mii, Volkswagen up! , Hyundai i10 and Skoda Citigo, but now it makes good sense as a used buy – especially for those after a first car.

Low running costs are the 107’s main strength. Peugeot never sold it with a diesel engine, but the perky little 1.0-litre Toyota-sourced petrol combined with the car’s light weight made it very economical and very efficient anyway.

It’ll do 65.6mpg and emit 99g/km CO2 – making it free to tax. If you go for an automatic gearbox, those figures change to 62.7mpg and 104g/km CO2, for £20-a-year tax thereafter. That’s still very good, but we’d recommend the manual anyway, simply because the automatic gearbox isn’t particularly good.

Well-suited to town driving, but it struggled on the open roads

The 107 is great around town. The 67bhp 1.0-litre engine has enough power to make it adept at nipping through city traffic, while the steering is light and visibility is good. All this makes manoeuvring and squeezing into tight parking spaces very simple. The car’s suspension is also well suited to absorbing bumps at low speeds, but the ride quality suffers the faster you go.

You’ll find the 107 struggles on the open road, however. The engine doesn’t have enough power to cope well with motorway speeds and it gets very noisy. Wind and road noise levels are bad, too, as the interior isn’t very well insulated. And because the engine has to work overtime just to maintain speeds over 60mph, you’ll find overtaking takes an age.

You can’t adjust the position of the steering wheel, either, which makes it hard to get into a good driving position. What's more, you feel very vulnerable next to lorries and SUVs from inside the little 107 – especially on the motorway.

It’s a real chore to drive on A-roads and motorways, because the 1.0-litre engine can’t quite cope with higher speeds and gets very noisy as a result.

The issue is made worse by the fact that the interior isn’t very well insulated, so you get a lot of wind and road noise, too. You also feel very vulnerable next to lorries and SUVs due to the cars size. There isn’t much head or legroom in the rear either, so it’s really only suitable for children – adults will feel the squeeze.

This isn’t an area where the 107 shines

The 107 really isn’t a very practical car. The boot has space for just 139 litres of luggage –less than what rivals like the Fiat 500 and MINI manage, even though they both put style way ahead of practicality. The 500 has a 185-litre boot and the MINI a 160-litre capacity. What's more, some of the 107’s direct rivals like the SEAT Mii have even more space, with the SEAT boasting 251 litres of space and the Hyundai i10 252 litres.

Space inside is also pretty tight. The rear seats are really only useable by children and are a pain to access in the three-door model. We’d therefore recommend going for the five-door bodystyle, especially if you need to get a child seat in the back.

With decent examples currently going for between £1,500 and £4,000, there’s bound to be a 107 on the market to suit your budget. As ever, we’d advise spending as much as you can afford on a model with the fewest miles on the clock and as much service hist

Perhaps the 107’s biggest weakness is its three-star Euro NCAP safety rating. Like the Citroen C1 and Toyota Aygo, it was downgraded from a four-star rating in 2012 when the testing body made its criteria more stringent. Too many rival city cars have a maximum five-star rating for this new score to be acceptable.

Peugeot hasn’t performed well in recent customer satisfaction surveys, either. It came 31st out of 32 brands in our 2013 Driver Power manufacturer rankings, with only city-car maker Smart coming between it and last place. This was a dreadful result for a major brand.

However, the 107 should prove to be very reliable, as it was co-developed with Toyota, which has a great reputation for dependability. It uses a Toyota engine and many other components from the Japanese manufacturer.

Used prices held on quite well at first, but are dropping now

With decent examples currently going for between £1,500 and £4,000, there’s bound to be a 107 on the market to suit your budget. As ever, we’d advise spending as much as you can afford on a model with the fewest miles on the clock and as much service history as possible. Air-conditioning and a CD player are nice to have, too, but this car was never offered with Bluetooth connectivity, so you’ll have to shell out for an aftermarket kit. 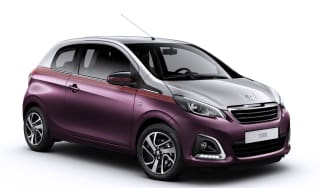 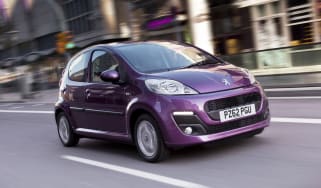 Everything you need to know about the all-new Peugeot 108, coming in 2014
Skip to ContentSkip to Footer