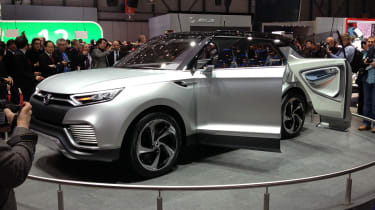 The SsangYong XLV concept car has been revealed on the first morning of the Geneva Motor Show. The new SUV is aimed at the Nissan X-Trail and Ford Kuga, but may also be available with the option of seven seats.

We first saw the XLV (eXciting smart Lifestyle Vehicle) at the 2011 Frankfurt Motor Show, but the car on display today shows a near-production ready version of the small 4x4. SsangYong hopes it will be one of the brand’s core models, and one that will underpin its future growth.

The version you see here is 290mm longer than the SsangYong XIV-1 concept car from Frankfurt, and previews an innovative seven-seat layout. Unlike conventional seven-seat cars like the SEAT Alhambra or Ford Galaxy MPVs, the SsangYong XLV has a middle seat that can slide back and forth between the second and third row. That means you can choose to have three seats in the middle, or three seats in the rear – depending on your requirements at any given time.

Should the car go into production, we’re told that the SsangYong XLV will initially be available with a petrol engine. However, some months later, this will be joined by a hybrid diesel engine, to lower emissions and make it one of the most economical small SUVs to run. That means with a manual gearbox, the XLV will emit just 98g/km of CO2 – or 109g/km on cars fitted with an automatic gearbox.

In terms of styling, the SsangYong XLV gets a distinctive SUV look with raised suspension, chunky bumpers and underbody cladding to protect the car from loose rocks and stones. SsangYong says the design you see here will feature in several new models in the future.

Inside, there’s a futuristic look with orange lighting and a large central screen. SsangYong claims a spacious feel, despite squeezing seven seats into a car that is only slightly longer than a new Nissan Qashqai. We’ve not yet had a chance to sit in the car – but we’ll report back as soon as we have.

The SsangYong XLV also uses an interactive communication system called ‘3S-Cube’. This allows the user to control functions on their mobile phone, while also providing information on the car’s safety features including cruise control, lane-keep assistance and an automatic emergency braking system.

SsangYong bosses told us that although the car previewed in Geneva is a seven seater, it is likely that a smaller five-seat model will be offered in the UK. As the car is currently only a concept, no prices or specs have been announced – though we’d expect the production version to cost less than £18,000.

For more information on the SsangYong range – visit the Carbuyer SsangYong reviews page. 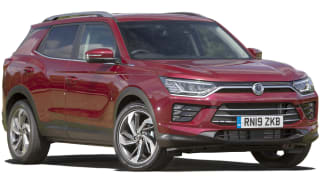