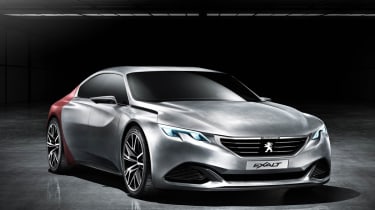 The Peugeot EXALT concept car that was revealed at the Beijing Motor Show hints at a future design direction for the company, which is making a conscious effort to bring its brand more upmarket.

The EXALT has stunning good looks, a classy cabin, cutting edge kit, and a powerful petrol engine that’s boosted by an electric motor.

Take the badges of the Peugeot EXALT and you could be forgiven for thinking it’s a sporty Maserati rather than a car that comes from the more mainstream Peugeot brand. The looks also serve a purpose, though, combining with a ‘Shark Skin’ finish on the body to help the four-door coupe cut through the air more easily to save fuel.

Peugeot tells us that the car’s body has been styled by hand – an obvious nod towards the car’s more premium status, and also a hint that Peugeot may be planning more up market models. That’s something Ford is already doing with the Ford Mondeo Vignale and the Ford S-MAX Vignale, both of which aim to steal sales form premium German brands, thanks to luxury cabins and top notch customer care.

The Peugeot’s premium look continues inside where there is plenty of wood, a leather-trimmed steering wheel, and a wool-based interior. The interior’s layout, meanwhile, resembles a sports car’s with a snug cockpit-like style. The 4.7m-long Peugeot is spacious, though, and gets a clever pantograph boot that gives excellent access to the load bay in confined spaces.

The EXALT’s also brimming with the latest hi-tech kit and most of the car’s systems are controlled via two large touchscreens. The conventional buttons that are there take the form of classy toggle switches that can be pre-programmed by the driver.

They control items such as Peugeot’s innovative black light system in the car’s headlights. It’s designed to improve the driver’s view of the road in low-light conditions. More new tech includes the car’s Pure Blue air treatment system, which filters VOCs (volatile organic compounds) out of the air as it enters the car and can also kill air-born germs.

The EXALT gets a 1.6-litre petrol engine – the same one found in the Peugeot RCZ R – that’s then boosted by an electric motor to develop 340bhp. The power is distributed via a grippy four-wheel-drive system. The result is strong all-weather performance and economy that should get close to 70mpg.

Although the EXALT is strictly a show car, we can expect some of its technology – including the touchscreen controls and hybrid engine – to feature on the new Peugeot 508 will be launched in the next few years.

For all the latest news on the current Peugeot range, visit the Carbuyer Peugeot reviews page. 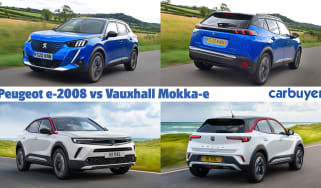