"The Peugeot RCZ R gets the standard car's great looks and adds much more performance and extra equipment – but for a price."

The RCZ R has uses the same 1.6-litre petrol engine that features in the RCZ 200THP, but its now tuned to produce 266bhp. The leap in power means the RCZ R is much quicker than the car it is based upon, but Peugeot has managed to increase the car’s performance without having to adverse an affect on economy.

All RCZs are good looking cars, but Peugeot have given the R a more aggressive look thanks to the inclusion of a new spoiler, bigger wheels, and matt-black roof arches. The somewhat boring RCZ interior is also lifted by the addition of two imposing sports seats.

Despite the significant performance increase over the standard Peugeot RCZ, the RCZ R actually manages to improve on its frugality, with economy rising slightly from 42.1mpg to 44.8mpg, while emissions drop from 155g/km to 145g/km, which means road tax costs £145 rather than £180.

Even though the RCZ R is extremely quick, it’s still a Peugeot so should be cheap to service and comes with the company’s three-year/60,000 mile warranty.

Fast and fun to drive

The standard Peugeot RCZ 1.6-litre THP never felt slow, so it is no surprise to find the Peugeot RCZ R feels very quick. As with the standard car, you don’t have to work the engine too hard to get useful performance, but push hard and it feels much faster than the standard car – and emits a pleasing noise while doing it. Getting from 0-60mph takes just 5.9 seconds and the Peugeot is limited to 155mph, otherwise it could go quite a lot faster.

The RCZ R’s stiffer suspension has been optimised with the car’s bigger 19-inch wheels to insure it provides excellent levels of grip and minimal body lean. The steering is also quicker, making the R feel more responsive than more basic models. Unlike the more basic RCZs, the R gets a clever bit of kit called a Torsen limited-slip differential, which helps it find more grip, in corners, when accelerating hard, and on wet roads. The gearshift also feels sporty, with a snappy action, and the R gets the same brakes as one of Peugeot’s old rally cars, which mean it stops even quicker than the normal car.

The RCZ-R has been built to be much faster in the corners than the standard car, so its suspension is significantly stiffer, but it still manages to do a decent job of ironing-out the worst of the UK’s roads. The Peugeot also gets an acoustic windscreen that reduces the noise that makes its way into the cabin. The Peugeot also has a system that amplifies the sound of the engine, when accelerating hard, but allows it to quieten down at a cruise.

Decent boot, but cramped back seats

Although the RCZ R is technically a 2+2 (with two small seats in the back), they’re so small that only young children could hope to fit. Nonetheless, they do serve as an extra place to store luggage if you exhaust the 309-litre capacity of the Peugeot RCZ’s boot. Up front, there should be space enough for anyone, and there’s a decent amount of adjustment to ensure you’ll be comfy behind the wheel.

The interior isn’t offensive to look at, but it shares many part with the old Peugeot 308 and can’t match the exciting visuals offered up by the car’s exterior. The RCZ R also gets red stitching in its interior, and a pair of sporty, body-hugging leather seats.

Safe, but there are quality concerns

The Peugeot RCZ didn’t feature in our 2013 Driver Power owner satisfaction survey, but as a manufacturer Peugeot did incredibly poorly finishing 31st out of 32 firms.

The RCZ has not been crash tested by Euro NCAP, but it is based largely on the original Peugeot 308, which was awarded five-stars when it was evaluated in 2007. The RCZ R gets kit including four airbags, electronic stability control and ISOfix mounts for child seats.

Prestige models from Audi and VW have better residual values

While the Peugeot RCZ R won’t hold its value better than the Audi TT or Porsche Boxster, it is likely to do better than the rest of the line-up thanks to its relative exclusivity. 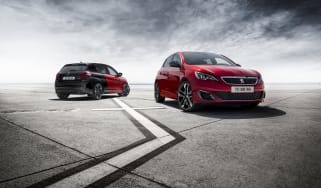 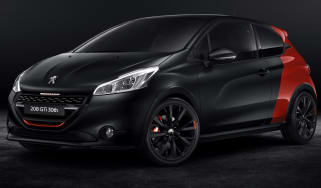