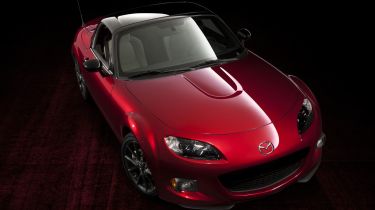 Mazda may have just pulled the wraps off the new Mazda MX-5 (or its internals, at least), but there's a double celebration this week as the company launches the Mazda MX-5 25th Anniversary Edition. Based on the current model, it marks 25 years of the company's compact sports car – a model that has seen impressive success around the globe. The new special edition gets both cosmetic and mechanical upgrades that should make it even more appealling to MX-5 enthusiasts.

The most obvious changes are on the outside where the car gets a Brilliant Black-painted roof, A-pillars, and door mirror housings. The 25th Anniversary Edition also gets its own exclusive shade of paint – Soul Red Metallic.

Inside, there's off-white leather for the seats and door trims, as well as a hand-finished decorative, Piano Black dashboard panel.

Underneath, the Mazda has been treated to suspension components from Bilstein – which supplies numerous race car teams – so we can expect the MX-5 25th Anniversary Edition to be even more fun to drive than the normal model, without having an adverse affect on the comfort of the suspension.

Buyers can choose to opt for an automatic gearbox over the standard manual, but all models come with Mazda’s folding metal roof rather than the fabric version that the MX-5 can also be specced with.

Since its launch in 1989, Mazda has built more than 940,000 Mazda MX-5s and still holds a Guinness World Record for the best selling two-seater in history. Much of the car's success has been attributed to its ability to provide the fun of a British sports car – like the original MGB – but with none of the reliability shortfalls.

For all the latest news and reviews from the Mazda range, visit the Carbuyer Mazda reviews page.