Hyundai ix35s powered by hydrogen to be delivered throughout Europe 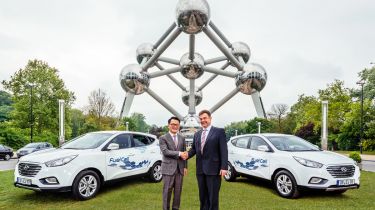 South Korean manufacturer Hyundai is the latest car maker to lend its support to the multi-million pound HyFIVE (Hydrogen For Innovative Vehicles) project. The deal means Hyundai will send 75 of its Hyundai ix35 Fuel Cell cars to countries including the UK, Germany, Austria, Denmark and Italy.

With £31million of investment, the HyFIVE project aims to both improve hydrogen fuel-cell technology and grow the infrastructure for refuelling the cars. The plan is to make the vehicles – that produce only water as a bi-product of propulsion – a viable everyday proposition.

For the third year, two of the Hyundai models have also been taking part in the Fuel Cells and Hydrogen Joint Undertaking (FCH-JU) by providing transport for Members of the European Parliament (MEPs), European Commissioners, EU officials and other EU policymakers.

Hyundai ix35 Fuel Cell cars are already being leased to public and private fleets, mostly in Europe, where the EU has established a hydrogen road map and began constructing hydrogen-fuelling stations.

The Hyundai ix35 Fuel Cell has been in development since 1998, and the company has continued to make advancements at its Eco Technology Research Institute in South Korea. In January 2013, the company started mass production of its hydrogen-powered vehicles.

Byung Kwon Rhim, president of Hyundai Motor Europe, said: “The fact that the Hyundai ix35 Fuel Cell has been chosen for a third consecutive year [in the Fuel Cells and Hydrogen Joint Undertaking] underlines the vehicle’s pioneering approach to clean mobility solutions. Hyundai Motor and our colleagues at the FCH-JU will continue to work together to promote the benefits and advantages of hydrogen and fuel cell technology.”

As yet, Hyundai doesn’t offer any Hydrogen cars for sale, but its model line-up does offer a host of economical conventionally powered petrol and diesel cars, including the Hyundai i30 1.6-litre diesel. It can return more than 75mpg. 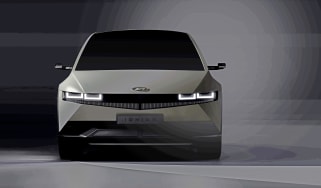