The Mercedes CLS gets a restyle, clever new kit, a revised range of engines, and a new gearbox

Mercedes has brought a raft of changes to the Mercedes CLS five-door coupe and the Mercedes CLS Shooting Brake estate to help the models compete with the Audi A7 and BMW 6 Series Gran Coupe.

Exciting additions include hi-tech headlights, a reworked interior and new engines, including a super-economical diesel. The car also gets a new nine-speed automatic gearbox.

More information on the price and launch date of the new Mercedes CLS and Mercedes CLS Shooting Brake is set to be revealed in the coming days. However, it is not set to cost much more than the current range, which starts at around £47,500.

Styling changes to the new CLS are relatively subtle but include a diamond radiator grille, new front bumper and darkened tail lights. The biggest change, visually, is the addition of standard multi-beam LED headlights.

Made up of 24 separate LEDs, they should prove to be some of the cleverest headlights on the market. A camera can detect oncoming cars and activate control systems to protect them from the CLS’s headlights, while maintaining a full-beam for the driver.

The camera and four control systems are also connected to the car’s sat-nav to provide the best lighting for the roads the car is travelling on. The headlights also feature low-beam LEDs that can swivel by up to 12 degrees to help light up verges and roundabouts. And, when you open the car, the headlights light up its surroundings with blue light.

Inside, the CLS and CLS Shooting Brake gets a revised sports steering wheel and new 8-inch display, while an updated control panel makes the Mercedes’ infotainment system easier to navigate. The infotainment system can be used to surf the Internet and now integrates with apps such as Google Street View. The system can also stream video, via Bluetooth, direct from an iPhone.

Customers can choose from five interior colours, six trim finishes, and two different grades of leather. The car can also be specified in AMG Line Plus for the first time, which gives the inside a sportier appearance.

The CLS gets new engines and the most interesting could well be the new 220 BlueTEC diesel. It has 168bhp, so should feel quick, but will also be cheap to run, although Mercedes has yet to reveal economy and emissions figures. The 250 BlueTEC diesel should be nearly as cheap to run but, with 201bhp, will be significantly quicker.

Replacing the old CLS350 is the CLS400, which gets an extra 26bhp but is set to feel much quicker than the size of the increase suggests. The range-topping model for the standard line-up is the 402bhp CLS 500 but if that’s not enough, you could opt for the performance orientated CLS 63 that has as much as 577bhp.

Mechanical changes aren’t just reserved for the engines; the new CLS also gets a nine-speed automatic gearbox fitted as standard, replacing the old seven-speed version. The new gearbox will aid economy as well as performance, and should also make for smoother gearshifts.

Safety has been uprated and the car now comes with autonomous low-speed braking. Buyers can also choose to spec features first seen in the Mercedes S-Class, including one that accelerates and brakes the car in stop-start traffic, and lane keep assist. 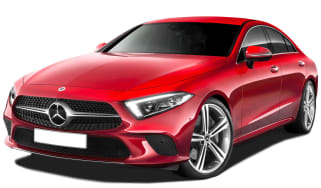