Order book opens for sporty Focus, which is available with a diesel engine for the first time 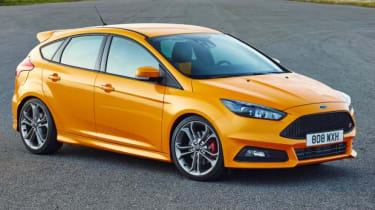 Ford has announced prices for the new Ford Focus ST and is taking orders for the car as of today. The new ST starts at £22,195 in entry-level ST1 trim, with both the diesel and petrol models costing the same. It's the first time that the ST range includes a diesel engine, offering buyers the lower running costs associated with diesel engines as well as the sporty performance expected from cars with the ST badge.

Ford says that improving ‘the entire driving experience’ was the number one objective of Ford Team RS, the European arm of Ford’s Global Performance Vehicle group, when developing the new Focus ST. The new car gets a reworked suspension and revised steering for improved handling, and Ford says it has also improved the smoothness of the engines.

The new 2.0-litre turbocharged diesel engine produces 183bhp and takes the Focus ST from 0-62mph in 8.1 seconds. The car should be very cheap to run relative to its performance – Ford claims it's capable of 64.2mpg and produces 114g/km of CO2, meaning the car will cost £30 per year to tax.

The more powerful 2.0-litre turbocharged petrol engine produces 247bhp and is faster from 0-62mph than the diesel as a result, taking 6.5 seconds. Unsurprisingly, economy is worse for the extra pace, with a claimed figure of 41.5mpg and CO2 emissions standing at 158g/km for road tax of £180.

On the outside, Ford has made an effort to give the new Focus ST a little more attitude than the previous model, so it sits lower and wider on the road and features more aggressive bodywork, including the sculpted bonnet and door panels. Revised headlights are slimmer than before and new 19-inch alloy wheels are also available as an option.

Martin Smith, executive design director at Ford Europe, said: “Focus ST has proved very popular with Ford’s sporty customers and the new model takes that to an even more striking and dramatic level.”

The new car is offered in the same ST1, ST2, and ST3 trim levels but the cabin itself has been redesigned to centre more on the driver and cut down on the amount of buttons and switches for a more uncluttered look.

The new Ford Focus ST is available to order now, with first deliveries scheduled for February 2015.

For reviews of cars in the Ford range, including the new Focus and the outgoing Focus ST, visit Carbuyer’s dedicated Ford reviews page. 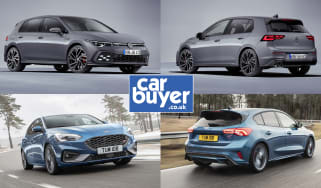