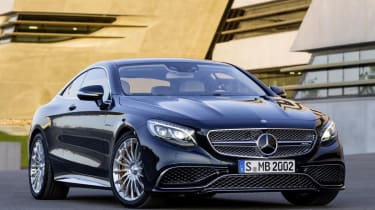 Details of the new Mercedes S65 AMG Coupe have been released today. The car becomes the top-of-the-range model in the S-Class Coupe line-up and will use Mercedes’ flagship twin turbo 6.0-litre V12 petrol engine.

The S65 is intended for S-Class Coupe buyers who want the fastest and most luxurious version possible. The V12 engine’s 630bhp means the car certainly delivers in terms of power, allowing it to complete the 0-62mph sprint in just 4.1 seconds and effortlessly cruise to a restricted top speed of 155mph.

Considering the S65’s size and performance, economy figures of 23.7mpg and CO2 emissions of 279g/km are actually relatively good, even if they do ensure the car will still be an expensive one to run. Ownership will incur a £1,090 tax bill in the first year and then cost £500 annually in road tax after that but running costs are unlikely to put off buyers who can afford the starting price of £183,065.

Until now, the S63 AMG Coupe was the range-topping S-Class Coupe model and the S65 gets some extra external detailing to help set it apart. The black finishes on the front of the S63 are replaced with chrome detailing on the S65, and the V12 model also gets special 20-inch alloy wheels, a slightly bigger rear diffuser and ‘V12 BITURBO’ badges on its sides.

The inside of the car is suitably plush for a car of the S65’s price, with leather sports seats offering electric adjustment, memory function, and heating as standard. There is a new leather-trimmed steering wheel, climate control and a 12.2-inch colour TFT display, which replaces conventional dials on the dashboard. The car also gets a heads-up display and Mercedes’ new touchpad.

Other technology included on the new model includes a system that adjusts the car's body through corners to increase comfort and Mercedes’ speed-sensitive variable steering, which allows the steering to be changed for a sportier or more relaxed feel. The S65 Coupe also gets parking assist technology, surround sound, keyless go and Mercedes' Driving Assistance Plus package.

Merecdes has said it expects the first examples of the S65 AMG Coupe to be delivered towards the end of this year.

To read reviews of cars in the Mercedes range, including the S-Class Coupe, head over to Carbuyer’s dedicated Mercedes page.