Aston Martin's fastest-ever convertible is due out later this year 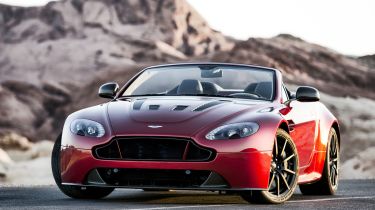 Aston Martin has released details of the V12 Vantage S Roadster, a car that will become the fastest-ever convertible Aston when it goes on sale later this year.

The Roadster is the convertible version of the V12 Vantage S Coupe that was launched last year and keeps all of the technology fitted to the hardtop. That includes the same seven-speed Sportshift gearbox, a system that allows the driver to adjust the setup of the car for comfort or performance, and powerful carbon ceramic brakes.

The trademark aluminium Aston Martin grille is replaced by a carbon fibre version on the new car and there will be an option to order the car with special lightweight ten-spoke alloy wheels. Carbon fibre seats will also be available on the options list.

Aston Martin will introduce the Q by Aston Martin Collection for the Roadster too, which comprises bespoke paint and finishes for the inside and outside of the car.

Economy figures are reportedly 19.2mpg and 343g/km of CO2, which are a slight improvement on the old V12 Vantage Roadster despite the new car having an extra 55bhp.

The price of the V12 Vantage S Roadster will be confirmed nearer its release date but we expect the car to cost around £153,000.