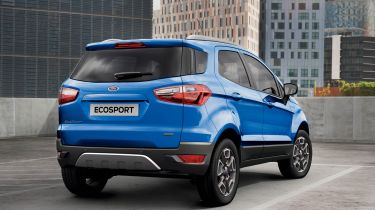 The Ford EcoSport SUV has been updated for 2015 and can now be specified without the awkward boot-door-mounted spare wheel. Trim levels have been also been tweaked and the car's price has been reduced.

The EcoSport is the smallest model in the Ford SUV range, which includes the Ford Kuga and the soon-to-be-launched Ford Edge.

Joe Bakaj, vice president of product development for Ford Europe, said: “The stylish and practical Ford EcoSport offers customers a flexible and economical SUV and with these enhancements EcoSport looks and feels even sharper.”

Among the tweaks to the EcoSport is the option of going without the awkward tailgate-mounted spare wheel. Ford has also added a big badge to the rear door and revised the design of the boot opening to make access easier.

The cabin has had a refresh, too: the centre console and door inserts are now finished in charcoal black, there are chrome inserts in the instrument cluster and a leather steering wheel.

Ford has also gone to some lengths to improve comfort and refinement, adding more soundproofing to suppress wind and road noise. There are even thicker seals around the pedals.

As before, the car’s raised suspension gives you an excellent view of the road ahead and all models have a good storage space.

The most economical engine in the range is the revised TDCi diesel, which now produces 93bhp (up from 89bhp). It returns up to 64.2mpg and its 115g/km CO2 emissions mean a road tax bill of just £30 a year.

The 1.5-litre petrol is the cheapest engine to buy, but it’s only available in entry-level Zetec trim and is the least economical in the range. It is capable of 44.8mpg, but its 149g/km CO2 emissions make for a hefty road tax bill of £145 a year.

Ford says it has made 'significant improvements' to the driving dynamics of the car, thanks in part to revised suspension elements that reduce body roll and improve the car's ride. The suspension is also 10mm lower to improve cornering.

Ecosports fitted with Ford's SYNC in-car connectivity system get a four-inch colour display in the cente console. The system features voice activation and can also read incoming text messages aloud. It connects to your phone via Bluetooth, is compatible with apps and can even alert the emergency services if the car is involved in an accident.

Safety equipment includes driver, passenger, curtain and side airbags, plus a driver's knee airbag. The Ford also comes with anti-lock brakes and electronic stability control. However, it was only awarded four out of five stars when it was crash-tested by Euro NCAP.

The 2015 Ford EcoSport is available to order now, with the first cars arriving in October. It’s priced from £14,245, which is around £700 less than the previous entry-level price.

Read our review of the Ford EcoBoost on our Ford reviews page.