The Peugeot 508 has been given a mid-life facelift in preparation for the impending launch of the new Ford Mondeo and Volkswagen Passat. The comprehensive job includes new exterior styling, extra in-car tech, and a refreshed engine line-up. As before, it is available as a saloon, SW estate, or as the RXH estate model with raised suspension and four-wheel drive.

While some facelifts are subtle, Peugeot has made obvious changes to the 508, in particular the car’s revised exterior looks. It gets the company’s new grille – as seen on the new Peugeot 308 – and bolder face in place of the old model’s sleeker design. With both the new Ford Mondeo and Volkswagen Passat hoping to use classy looks to lure customers away from upmarket brands such as Mercedes, it is clear Peugeot hopes to do the same. 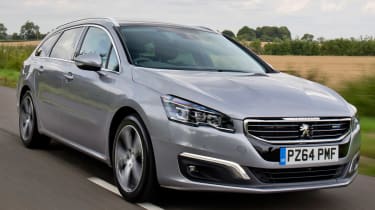 Top-of-the-range models – such as the RXH, GT and Allure – all get full LED lighting at the front, with fog lights that follow the direction of the steering wheel. While the rear lights in the estate and RXH models remain the same, the saloon now gets a new design using no less than 36 individual LEDs.

Get in and the changes should be nearly as obvious, especially in base models that now get a seven-inch touchscreen as standard. It is used to control items such as the sat-nav, air-conditioning, sound system and smartphone connectivity. As ever, the touchscreen allows Peugeot to cut down on conventional buttons to give the interior a smarter look. As before, top-spec GT and RXH models get an aircraft-style Head Up Display (HUD), which shows driving and navigational information without the driver having to take their eyes off the road. 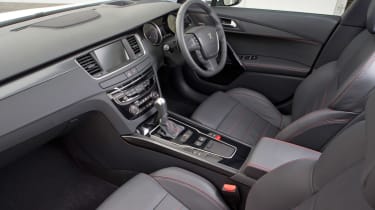 As before, the 508 can be had with a 1.6-litre e-HDi with 113bhp engine or two 2.0-litre e-HDi engines with 138bhp or 161bhp. The top-of-the-range model remains the 197bhp 2.2-litre diesel. New to the range is a pair of 2.0-litre BlueHDi diesels. The less-powerful 148bhp version costs just £20 annually to tax, while the 178bhp model’s tax will set you back only £30 a year. The latter will come fitted to the four-wheel drive RXH model from November.

Prices start from £22,054 for the basic Peugeot 508 Active saloon fitted with the 1.6-litre diesel engine, while the four-wheel drive 508 RXH estate, with Peugeot’s proven diesel-electric hybrid engine, tops the range at £34,645.

Read all our reviews of the Peugeot range, on the Carbuyer Peugeot reviews page.