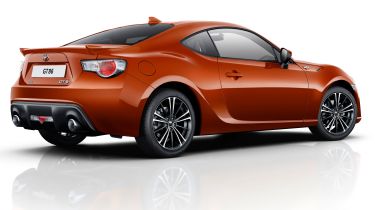 Toyota has launched a new entry-level model of the Toyota GT 86 that makes the car more than £2,000 cheaper.

Previously the GT 86 was only available in one trim level and the starting price was fixed at £24,995. The launch of the basic ‘Primo’ model sees the cost of the coupe drop to £22,995. Toyota has launched an introductory promotion offering £500 off the Primo, making it available for £22,495 for a limited time.

The lower price means you have to make do without several features of the ‘classic’ spec car, including the rear spoiler, keyless entry, dual zone climate control and LED running lights. The Primo is only available with a manual gearbox too. However, 17-inch alloy wheels, air-conditioning and the Toyota Touch multimedia system all feature on the list of standard equipment.

Toyota has also added an even sportier version of the GT 86 to the range. Called the Aero, the new model features a larger rear spoiler than the standard GT 86 as well as front, side and rear skirts. Completing the more aggressive look are 18-inch alloy wheels finished in anthracite grey. The GT 86 Aero costs £27,495.

A special edition called the Giallo will also be available in addition to the new models in the range. Costing the same as the Aero specification car, the Giallo swaps the sporty bodykit for special black leather seats, gloss black touches on the outside of the car and model-specific yellow metallic paintwork. Only 86 will be made available in the UK.

All cars in the updated GT 86 line-up use the same 2.0-litre petrol engine and all can be ordered with a new optional Carbon Pack that adds carbon-effect door mirror covers, a rear bumper protection plate and rear parking sensors for £395.

All models in the new range are available to order now. To read a full review of the GT 86, as well as other cars in the current Toyota line-up, visit Carbuyer’s dedicated Toyota page.