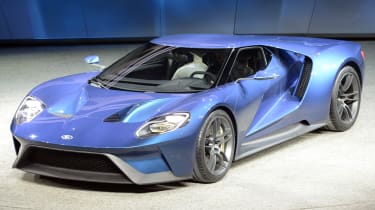 Ford has lifted the covers off its new Ford GT supercar at the Detroit Motor Show.

Confirming that the car will go into production, Ford has indicated the new GT will cost around £250,000 and be available to buy in 2016.

The car uses a 3.5-litre twin-turbocharged V6 EcoBoost petrol engine that produces 592bhp. Its body is made from carbon fibre and the chassis is made from aluminium to make the car light and strong.

The Ford GT's styling is inspired primarily by aerodynamic efficiency, according to Ford, but the overall look is of a modernised version of the Ford GT launched in 2004.

That car was a more obvious tribute to the original GT40 race car from the sixties, while this latest concept arrives in time to celebrate next year's 50th anniversary of the GT40 coming first, second and third in the 1966 Le Mans 24 Hours endurance race.

While the Ford GT unveiled today still sports some of the trademark design touches from the sixties car – such as the roofline and bonnet scoops – it looks much more modern than either the GT40 or the mid-noughties GT thanks to its sleek, aerodynamic styling.

Depending on how development of the production version progresses between now and the car’s release, the Ford GT could rival cars such as the Lamborghini Huracan and McLaren 650S; its quoted 592bhp power output would certainly put it on that level.

Ford has said it wants to add 12 performance cars to its range by 2020 and the Ford GT would certainly count as one of those.

Details are currently limited but it looks likely that the car will be on sale by late 2016. We'll bring you more information as soon as it's available.