"The Ford GT is hard to beat on a track, but you may prefer a Focus off it" 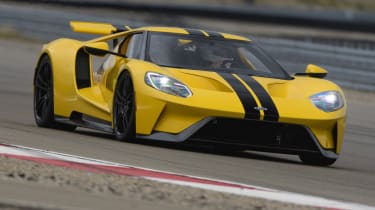 The Ford GT name carries an unenviable amount of historical baggage and the American carmaker has to be really careful with its use. The name has been celebrated by enthusiasts ever since the legendary Ford GT40, a car conceived to beat Ferrari at its own game, finished first, second and third in the 1966 Le Mans 24-hour race.

Every time Ford mentions a follow-up. it’s met with wild fanfare and speculation, first with the angular, futuristic GT90 concept car, then with the 2004 Ford GT, a car whose appearance owed a lot to the GT40, but which was decidedly up-to-date under the surface. This time, though, any external resemblance is purely out of historical respect.

While the headlamps and front intakes pay homage to the original, everything else about the latest Ford GT is thoroughly cutting-edge, from the carbon-ceramic brakes to the seven-speed dual-clutch sequential manual gearbox. It also abandons the historic V8 engine for a modern 3.5-litre EcoBoost petrol V6, twin-turbocharged for a massive 638bhp.

As you might expect, this means serious performance. The GT can whip from 0-62mph in 2.8 seconds on its way to a 216mph top speed, so it’s far quicker than the GT40s that furthered Ford’s motorsport credentials in the sixties. In fact, the GT really is as close to a racing car for the road as you’ll ever find, with only the barest hints of civility to make it useable on the public highway.

The Ford GT really isn’t a car you buy for its posing potential. Although it looks fantastic reflected in shop windows, it’s far too bulky, cramped and impractical to make any sense as an everyday car. Although many enthusiastic drivers will put up with a certain amount of inconvenience to unlock untold thrills on a trackday, a woeful 11 litres of boot space and 150-mile fuel range make the Ford GT even less easy to live with than other members of the 200mph club, such as the McLaren 720S and Lamborghini Aventador. 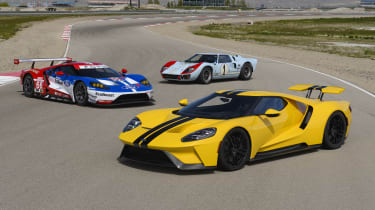 It also makes the cars listed above look rather good value – it costs £450,000 and you’re likely to find it difficult to get on the waiting list anyway. Only 1,000 will be hand-built over a three-year production run, with only 40 allocated to UK buyers – and you have to apply to Ford for the honour of securing one. Ford says this approach is intended to prevent speculators from buying the car only to re-sell at a huge profit and that the Ford GT is intended to be driven, not treated as an investment locked away in a vault.

By driven, Ford means driven hard and in this light the total lack of creature comforts makes perfect sense. The Ford GT is an exclusive plaything for the very well heeled and will only disappoint if you treat it as anything other than an extremely desirable toy.

Expensive – and inconvenient – to keep in fuel

We found the Ford GT to return between 15 and 17mpg when we tested it – higher fuel consumption than is claimed for the Lamborghini Aventador LP700 (17.7mpg) and making the 26mpg McLaren 720S seem almost frugal in comparison. Of course, if you own one of these, you’re likely to have deep pockets and the cost of fuel may not be an issue, but a range of just 150 miles on a full tank will soon prove tiresome.

A car like the Ford GT deserves a category beyond “running costs”. ‘Flight readiness support’ seems more appropriate, because the cost of replacement carbon-ceramic brake components and tyres to suit a 216mph supercar will be a world away from those associated with less specialised machines. On the other hand, although Ford is actively discouraging buyers from treating their GT as an investment, this is a car whose retained value is likely to come as a pleasant surprise when it comes time to sell.

Getting the best out of the Ford GT isn’t easy and this represents a significant limitation to the car’s appeal. On normal roads, be they winding country lanes or long sweeping curves, you’ll never get further than scratching the surface of what it’s truly capable of. And if you take it into town, the sheer bulk of the GT will give you white knuckles for entirely the wrong reasons.

Like a wild animal, the Ford GT is really best kept in its natural habitat, and when you take it to a favourite circuit you’ll appreciate that fact all the more. Only then can you let the 3.5-litre, 623bhp EcoBoost V6 engine off its leash and the 2.8-second 0-62mph time is only the beginning of what it can offer. It can hit 216mph flat out, too, but that’s almost academic and only serves to underline the huge performance potential available at the twitch of a toe. 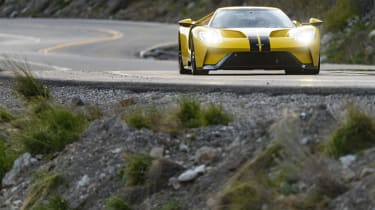 Only when it’s parked next to a Ferrari or McLaren can you see just how much emphasis Ford has placed on making the GT as track-ready as possible – the curvaceous 720S looks almost bloated in comparison. The GT’s passenger compartment is ‘pinched in’ so as not to obstruct airflow and this – together with computer-controlled flaps – results in aerodynamics that produce more downforce than virtually any comparable car. This helps to push the Ford hard onto the road at speed, maximising grip and improving agility.

And it really works. Once you’ve got past the initial shock of acceleration – which doesn’t actually feel quite as pulverising as that of the McLaren 720S – you realise that the GT can generate cornering forces beyond anything else on four wheels. The air rushing past forces the GT down onto the track like a limpet and you can feel the tyres gripping the road at either end of the car. And all this is before you engage ‘Track Mode’. 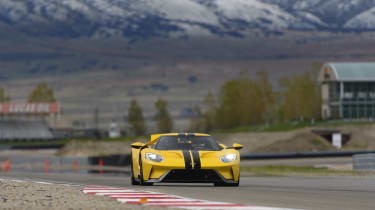 Enable this and the suspension is made literally twice as stiff, reducing body lean to zero. This makes the way the car changes direction at speed even more precise and immediate, and even more addictive. And stopping is almost as exciting as going: as well as those almighty carbon-ceramic brakes there’s a flap that deploys in the air stream, helping the GT to brake as if it were a plane coming in to land. Only your lack of a sponsorship deal and fireproof Nomex suit will remind you that you’re not a racing driver.

The Ford GT serves up drama, not comfort

The passenger compartment of the Ford GT isn’t like that of other cars – all it offers is somewhere to sit in safety while you get on with the job of driving. In comparison, that of a McLaren 720S is like a limousine. And with precious little space for stretching out, you’ll think twice before taking the GT on a touring trip.

Access is via a long door that opens out and up, before you haul yourself over a high, wide threshold and into the low-slung bucket-style driver’s seat. When the door closes behind you, it becomes apparent how confined your quarters are. To find a perfect driving position, the steering wheel and pedals come to you while you remain secure in your seat. The seat base is an integral part of the GT’s carbon-fibre chassis, although the backrest does adjust to fit a variety of body types. 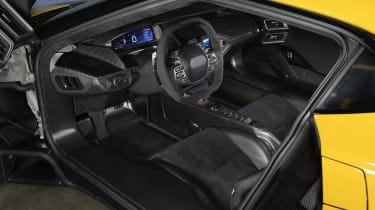 Despite the no-nonsense minimalism of the GT’s interior, physical discomfort isn’t an issue. Although claustrophobia sufferers will rely on the distraction of driving thrills to avoid symptoms setting in, the GT isn’t an uncomfortable car. In fact, when ‘comfort’ mode is selected, the suspension – though firm – is damped in such a way that bumps are dealt with smoothly. You can still feel them, but they don’t jar you.

However, this smoothness is purely intended to make the GT better on the track. In fact, every element of its interior serves as a reminder that you should be lapping Silverstone and not Stoke-on-Trent.

The Ford GT is more about racing boots than boot space

Limited interior space is just the beginning of a long list of reasons that the Ford GT isn’t suitable as a day-to-day car. For starters, there’s nowhere to put anything. Not only are there few storage cubbyholes, but the tight seats mean you won’t want to put much in your pockets, either. There’s little flexibility in the luggage compartment, either – it can only take 11.3 litres of your belongings. You’ll get away with a small, light, soft bag, but nothing in any way bulky.

This compares to the McLaren 720S, which has two relatively generous storage areas as well as a fairly spacious passenger compartment. It can also manage a far longer journey than the Ford before you need to top up the tank: a 17mpg average fuel consumption means the GT’s 57.5-litre fuel capacity will only last 150 miles, even if you drive with moderation.

The biggest practicality limitation the Ford GT suffers from, though, is its imposing scale. Although essential to avoid mechanical and aerodynamic compromises that could get in the way of on-track excellence, the GT’s bulk makes it a pain on normal roads. Width restrictions on urban roads need to be closely obeyed.

These limitations are an unfortunate side-effect of the GT’s race-car-for-the-road ethos. All told, you have to put a lot more effort into enjoying the Ford GT than in most other supercars.

The Ford GT relies on strength and agility to keep its occupants safe.

Ford has designed its supercar flagship to excel on track and it employs many of the same features that keep racing drivers safe during hard-fought competition to ensure that its lucky buyers are kept from harm.

However, its excellence in the handling and braking departments should make incidents in normal road traffic easy to avoid. Its massive carbon-ceramic brakes can be relied on to scrub off racetrack speeds time and again and far outperform those of most other cars on the road, so the GT’s stopping capability probably exceeds its driver’s reaction times. This is good news in the absence of technologies like automatic emergency braking.

As only 1,100 Ford GTs will ever be built, it will never undergo crash-testing by experts Euro NCAP, but its carbon-fibre construction implies massive structural strength, while occupants are held firmly in their body-hugging seats by serious race-style harnesses.

Reliability, on the other hand, is harder to predict from such a highly-strung car. Ford’s less-than-impressive 27th-place ranking (out of 32 brands) in our 2016 Driver Power owner satisfaction survey is perhaps more directly relevant to drivers of Fiestas and Focuses than £450,000 supercars – there’s little excuse for Ford to provide anything less than total owner delight in such an expensive, esoteric car. 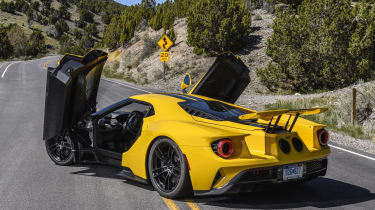 The Ford GT is in a class of one, but perhaps one is enough

That the Ford GT is more track-focused, more determined to thrill and less forgiving of everyday use than any virtually any other car. Its £450,000 price tag rules it out as an impulse purchase for most and dwarfs the cost of a Ferrari 488 GTB, Lamborghini Aventador or McLaren 720S.

Is it worth this outrageous outlay? Those who’ve eagerly signed up for a place on the waiting list clearly think so. The heritage of the GT virtually guaranteed interest from investors and speculators, while every dyed-in-the-wool supercar enthusiast knows that Ford GT is a first-class nameplate.

However, if you’ve not been lucky enough to secure one of the 40 examples coming to the UK, we feel you shouldn’t be too disappointed. Although the thrills provided by relatively bargain-priced rivals like the the 720S aren’t quite as visceral as the GT, they make a very acceptable consolation prize.