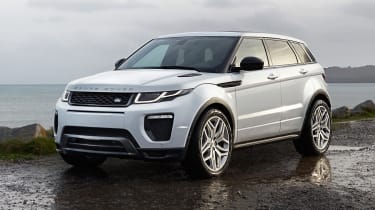 The revamped Range Rover Evoque is on sale and has become the most economical model ever produced by Land Rover. The facelifted car is priced from £30,200 in entry-level SE spec.

The gains in efficiency are largely thanks to a new 2.0-litre diesel engine that Land Rover says will deliver as much as 68mpg. A quick crunch of the projected running costs suggests the new Evoque could be around £3,700 cheaper to own over three years than the outgoing model, despite costing £2,500 more to buy initially.

On the outside, the design of the 2016 Evoque represents evolution rather than revolution, with a modified grille, a redesigned front bumper, new alloy wheels and a fully adaptive LED headlight design setting the car apart from its predecessor.

Updates to the interior include new seats, a new eight-inch touchscreen infotainment system and a selection of fresh trim colours.

It’s the launch of the new 2.0-litre TD4 diesel engine in the Evoque that’s the most eye-catching aspect of the new model. It’s the first engine from Jaguar Land Rover’s new £500m facility in Wolverhampton and will be available with either 148bhp or 178bhp. 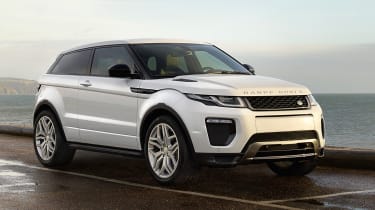 The lesser-powered version is the one delivering the headline figures; it’s 18% more efficient than the Evoque’s previous engines, promising 68mpg and CO2 emissions of 109g/km, for road tax of £20 per year. The extra power of the 178bhp version means economy is slightly worse at 59mpg and emissions of 125g/km of CO2.

The new Evoque is also available with a 2.2-litre petrol engine that will get the car from 0-62mph in 7.6 seconds. Despite the straight-line speed on offer, that model should still achieve 36mpg. Land Rover has fitted start/stop technology to all models and has also extended service intervals for the Evoque from 16,000 to 21,000 miles to help further reduce the cost of ownership.

A new infotainment system, dubbed InControl Touch, features in all new Evoque models. It uses a software system that allows users to flick between functions in the same way you swipe between screens and in apps when using a smartphone. DAB digital radio is also a standard piece of kit across the range. The basic infotainment system can be upgraded to include SD-card based sat-nav, while higher spec models like the HSE Dynamic (from £40,500) and Autobiography (from £51,800) come equipped with hard disk-based sat-nav, TV screens for rear passengers and a Meridian stereo upgrade. 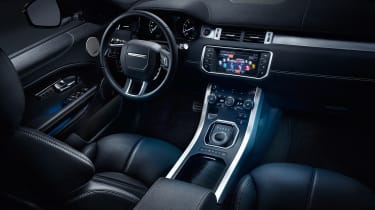 The 2016 Evoque also sees the introduction of Land Rover's All-Terrain Progress Control, which maintains a slow speed when driving off-road, allowing you to concentrate on steering through tricky terrain. There are also handy touches like a bootlid that can be opened by waving a foot under the rear bumper if you have the car key in your pocket.

The new Evoque comes with plenty of safety kit as standard, including lane-keep assist, automatic emergency braking and a system that warns you if you're getting drowsy at the wheel.

The revised Evoque is on sale now - read our review or check out our list of the top 10 SUVs on the market.